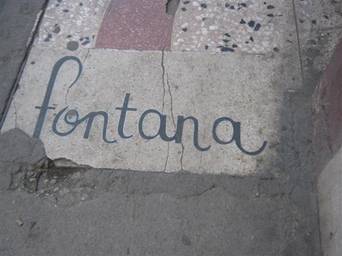 Wandering around some of the shopping streets in Havana, with the objective of photographing shop logos embedded in the granite floors of their entrances, I was shocked at the Fontana store on Neptuno Street with the absurdity that accompanies us every dat.

When I was taking the picture, after having come to an agreement with the clerk who was sitting next to one of his dirty shop windows, a character who said he was the manager came out, angry, and told me it was forbidden.

On asking him why, he responded to me, upset, that it was an order from the superior bosses, adding: It is forbidden to photograph the floor, the store inside and out, the display windows and even the bars.

I smiled and answered him: Tell your superior bosses that it is forbidden to photograph the ruins that Havana has been turned into, cannot hide the reality

I’ve confronted this absurd situation in cafes, restaurants, shops, offices and other state property. It seems, indeed, to e a government regulation. Perhaps they think that someone could copy their primitive sales systems and abuse the public. Anything is possible.

But it’s not the case in private establishment, where they’re happy when people take pictures and the employees themselves will push the shutter for you, because it’s free advertising.

Clearly, between the private businesses and the state businesses there is a lot of difference: the former are pleasant, agreeable with good service, while the second, although the sell in hard currency, are dirty, disagreeable and with the worst service.

As a photograph is worth a thousand words, here I show you some that speak for themselves. The title photo is the sidewalk on Fontana, taken before the manager came out, the second is Neptuno between Consulado and Industria.