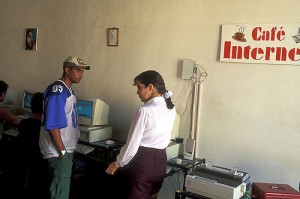 Cuban civil society is looking forward to what will happen in July when the network structure of the island is connected to to the fiber optic cable that came in early February to Cuba from Venezuela. The event, which will multiply by 3,000 the speed of data transmission, also helped the government admit its fear of individual use of the virtual tools of information.

In 1996, Cuba was officially connected to the Internet, but the government made ​​clear, legally, its policy towards full access to the services the network provides. Since then, the “network of networks” is centrally managed by Empresa de Telecomunicaciones de Cuba SA (ETECSA) and operated by state institutions specifically authorized by the Ministry of Informatics and Communications (MIC).

Beginning in the year 2000, the Cuban government implemented, legally and technologically, an infrastructure that allows it to control access by Cubans to the Internet, through a hierarchical network of state agencies, identified as providers of “Public Services of Internet Access.”

That same year, a common international access point to the network (NAP) was legally established, ensuring that all international outgoing Internet traffic was sent from that connection. In that way, it was assured that the interconnections between national users of the Internet were routed through the national transmission media.

At the end of January 2011, the Cuban government announced the sale of the foreign shares in ETECSA, and also the purchase, at 706 million dollars, by RAFIN, a Cuban company owned by brothers Raúl and Fidel Castro. The possession of most of the shares lets them control the principal provider of the public service of data transmission.

The providers of Public Services of Internet Access cannot accept requests for installation by persons not duly authorized by the MIC. However, the regulations governing the activity requires them to accept as users “all natural or legal persons who want it.” However, the same laws have a proviso. Providers offer their services “without more limitations than those imposed by the laws in force in the country.” Since 1996, the Cuban government declared that “access to computer networks of global reach shall have a selective character” and “will have to be approved by the Interministerial Committee” composed of five ministers and chaired by the head of the MIC.

Among other legal obligations, these providers “are required to define the authorization of persons and entities that require the use of national or international Internet access services,” including “remote access from home or anywhere in the country, as well as from abroad.” They also have a duty to report the number of users with full access to the Internet, those with e-mail accounts and their IP addresses. Also required are the number of computers that access the network from places of residence and publicly. A supplier who fails to comply with the regulations of the MIC may lose its operating license.

In 2004, the Cuban government designated the “Internet Zone” to the spaces in hotels, post offices, cybercafes, etc, which provide navigation services over the Internet and email to the public costing between 1.50 and 10 convertible pesos (CUC) for one hour of access to the Web. In 2008, it completely regulated service in these centers, after Raúl Castro announced that Cubans could receive services in hotels, and authorized the sale of computers in the retail foreign currency market.

From that moment, the alternative Cuban blogosphere began to develop, currently composed of about 40 blogs critical of the government, belonging to a group of citizens, mainly young people who update their sites from hotels, embassies or with the help of relatives and friends abroad .

Providers must also block “access to sites whose contents are contrary to social interests, ethics and morals, as well as the use of applications that affect the integrity or security of the state.” One of the works of the Interministerial Commission created in 1996 was to ensure that the information “is reliable, and that it is obtained in line with ethical principles, and does not affect the interests or security of the country.”

The Cuban government is mainly concerned that the new generation of dissidents uses Twitter, Facebook and other online social networks. These sites were used to organize digital protests earlier this year that led to several revolutions in the Middle East.

Last March, the newspaper Granma announced, according to statements by Justice Minister Maria Esther Reus, that “Cuba will adjust the existing legal rules to the decisions taken as a result of the Sixth Congress of the Communist Party of Cuba,” held April 16 to 19.

Motivated by the advent of fiber optic cable to Cuba, the deputy minister of MIC, Jorge Luis Perdomo, referred to the development of the first Telecommunications Act to regulate the sector and to “promote order” in the services it encompasses. The progress in technological development that was represented with the arrival of the fiber optics cable to the island was overshadowed after State Security considered the “network of networks” as the new “battlefield”–a cyberwar–and the official media demonized the use of communication equipment.

Faced with these developments, there is no doubt that the future of the Internet in Cuba has a question mark hanging over it.