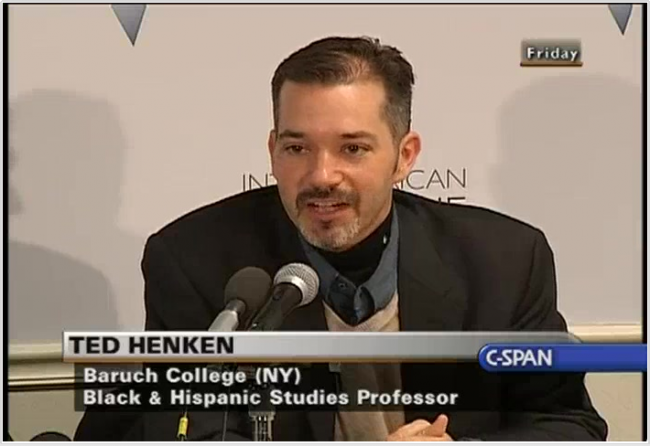 Good old Ted Henken was caught in the crossfire. I met him on his latest trip to Cuba. He’s an academic who speaks Spanish like a black man from Carraguao. The Cuban reality interests him greatly and he understands it well.

He was born in Pensacola, Florida and is a professor at a university in New York. He has a blog, El Yuma, and is a humanist and leftist. He meets all the requirements of a good democrat. He knows how to listen and respects differences of opinion.

He’s the type of person the Cuban government, which I don’t think has too many followers in the United States, should respect for his rectitude, honesty and professional ethics.

But as it happens the Cuban special services are wary of most of the people who come from the North. Erasing mental stereotypes takes time. And, unfortunately, the Cuban intelligence officers have been trained and raised with the image of Uncle Sam who comes in every disguise, including academics, to subvert the order.

And Ted comes from the North and is an academic. Also he brought a burning proposal in his backpack. Talking with bloggers from both sides. He was a perfect target. We already know that the regime sees a portion of the alternative bloggers as cyberwar commandos capable of causing more damage than an Al-Qaeda franchise.

In the rearview mirror, the Creole mandarins are seeing in technicolor the wave of protests in the Middle East and the civil war in Libya. The autocrats are trembling.

And they have to find new enemies to suppress and scare the masses. They can’t sit the creators of internet, twitter or facebook, in the dock of the accused, they point the censoring finger at those who use such tools without state approval.

In the “brave fighters of silence” didn’t like a gringo from New York coming to Havana to try to build bridges. The political police, more than any other authority, need an enemy. They don’t look kindly on pro-government bloggers who let their heads hover over the words dialogue and council.

And even though Ted didn’t come to Havana tobe the mother-in-law trying to harmonize damaged matrimonial relations, he chatted with bloggers of both tendencies. And he made the State Security tough guys nervous. At the airport, before he left, they put him on the black list. And told him, this will be your “last visit.”

Their motives could be great or nothing. They need adversaries. It’s the combustible to sustain the battles, justify the spending of resources, and maintaining high morale.

So Ted gave them the hook. A Yankee who is interested in the social situation of Cuba and not mulattas and mojitos. A weirdo. The authorities want the Yankees to come … but to spend dollars and shake their hips at evening soirees. Don’t think and leave a lot of tips.

Thus, Ted Henken unwittingly got caught in the crossfire. Despite being a ‘gringo’ leftist Latin American scholar and coming on his own account. But he came the North. That’s enough.