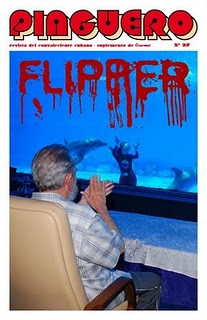 I don’t know why, nor for what, the obscure reasons and the theories surrounding his reappearance don’t interest me. I don’t think, even for a moment, of trying to figure out Fidel Castro’s return to the cameras. There are things in life that that are only for delight, and this is one of them.

The Twilight of the Dictators is hard not to enjoy in its entirety, since his retirement in 2006, I had a feeling I would miss a good part of the senile finale of the “Cuban Revolution.” I was wrong and I rejoice for my mistake.

I had to satisfy myself with the Reflections, becoming more like science fiction short stories in nickel magazines than anything else, good for a laugh, but infinitely inferior to their graphic versions — it wasn’t for nothing that television flooded the market place in the twentieth century.

It is not the same as reading this:

“The economy of the super power will collapse like a house of cars. American society is the least prepared to withstand a catastrophe like that the empire has created on its own territory from where it left.

We are ignorant of the environmental effects of the nuclear arms, which will inevitably burst upon various parts of our planet, and that in a less severe variant will be produced in abundance. To venture a hypothesis would be pure science fiction on my part.”

Or listening and seeing this.

Gentlemen, without sadness or despair, this miracle of the national comedy calls for a celebration, there is a distinct possibility that this will be the last time we will see it pass by.