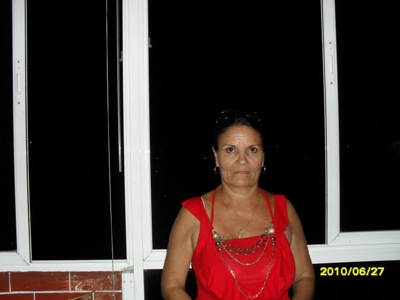 I will not go on and on, I don’t intend to bore anyone. My name is Georgina Noa Montes and I live at number 24 First Street, between Calzada de Bejucal and A Street. There is my home and if you want to call me you can do so at (535) 236-1408.

On December 7, 2009, I was granted a visa to travel to the United States as a refugee. On December 14 of the same year I presented my documentation to the Immigration Office, they took the papers and told me to come back after a month. I waited the prescribed time and returned on March 1 and an official attended to me… Well, rather he neglected me because he said neither I nor my family could leave the country.

I won’t deny that it bothered me. I am powerless, knowing that in my country, and this is true for everyone, there is always someone who decides for me. So I counted to ten, took a deep breath, and turned back to ask, calmly, “For how long and why?”

The official said he couldn’t give me an answer because the information is not in the public domain.

Fine, it is not in the public domain, but it doesn’t affect the public.

On June 9, 2010, I wrote a brief letter to the Council of State demanding an explanation. No one has answered me, I am still waiting for a reply. I remind them that it is a violated to refuse to answer the complaints and letters of the citizens.

I understand, and even respect, those who remain silent. But I have no reason to accept this violation of my rights, or that anyone has the right to punish me for exercising my right. Do we or do we not have rights? Are we or are we not prisoners? Are we or are we not hostages? Is there a law authorizing a person to institution to trample on my rights with impunity? No, no there is not; and if there is, we will change it. That is why we are Cubans.