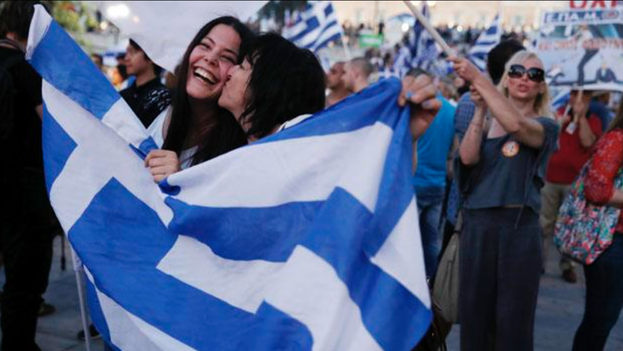 14ymedio, Reinaldo Escobar, Havana, 6 July 2015 — The “No” side won in the Greek referendum on Sunday. This controversial decision has given Raul Castro a chance to position himself on the multipolar world stage through a letter that the official press has published ad nauseam. The general president sent a message of solidarity and convergence to Alexis Tsipras, in which Athens and Havana display their points of contact.

The possible exit of Greece from the euro zone could occasion its approach to the Russian and Chinese gravitational camp, which also constitutes the strategic Cuban rearguard in the face of any negotiation with the United States and the European Union. Half a hundred words have been enough for the first secretary of the Communist Party to warn any negotiator that the “courageous policy” of the current Greek government would be an example to follow.

Elevating the tone of nationalism, putting the political discourse of sovereignty above the wellbeing of the population, and slamming the door to the creditors make up a part of the script that the Castros have been acting out for decades and that now has a good disciple in the leader from Greece’s Syriza Party. A way of governing that prioritizes fanfare in discourse above effectiveness in actions and calls for national sovereignty even though the individual is left out in the cold.

Tsipras (b. Athens 1974) has put his country on the brink of breaking away from the European Community and on the possible path of returning to the drachma, but Havana wins this game. It hasn’t even managed to reunify the two circulating currencies as it has projected it would do in more than one official economic plan. Both countries have broken economies, inflated growth numbers, dysfunctional financial systems, and, in the halls of power, leaders with more arrogance than pragmatism.

However, while the Greek government managed a nearly 62% acceptance of the referendum against the powerful troika (Central European Bank, European Commission, and International Monetary Fund), the Plaza of the Revolution has no need to submit its decision to a referendum. In the case of having to do it in the short or medium term, it would engage in its known mechanisms of coercion to ensure an overwhelming ninety-plus percent popular approval.

In the eighties, the Soviet subsidy made the most optimistic among us dream that Cuba could become a kind of Athens of the Caribbean. Today Raul Castro applauds Greece to send a message to the current geopolitical poles of the planet. A direct wink, with something of the flirt included, threatening the suitors in the struggle to approach the island with “falling into the arms of another.”

The enormous difference is that the European Union, the United States and NATO are more concerned over Greece’s approach to its contenders, than that far off Moscow or distant Peking could be interested in what happens in Havana. Where Greece wants an out because it cannot pay, is where Cuba would like to enter, which it demonstrates with this funny way of knocking at the door.

The results of Raul Castro’s accolade to “comrade Alexis Tsipras” may be one of those shots that backfires. At a time when the country is demonstrating its desire to attract investors and receive credits, it doesn’t help to give pats on the back to someone who hasn’t met its financial commitments. This is not the time to try to look like Athens.