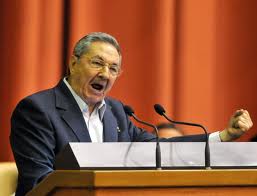 In recent days a horde of soldiers and officers from “State Security,” most in plainclothes, who are located in Section 21 (headquarters of “Counterintelligence”), attacked a peaceful group, of which I was a part and that was in front of the police station at Acosta and 10 de Octubre Streets, to support the elderly parents of Antonio Rodiles, whom they advised, in their turn, of the destination and “legal” case for which their son was being kept in the cells of that station.

One day earlier, this same horde of criminals, violators of justice and of the most elementary human rights, had assaulted a group of people who peacefully presented themselves at the aforementioned Section 21 together with the attorney Veizant Boloy to inquire about the whereabouts of his wife, the attorney Yaremis Flores, who had been kidnapped from their home by police.

Afterwards they took me to spend several days in the dungeons, where I remained without food and water, the only way I had to protest against the violence committed. They released me without charged thanks to the public outcry that resulted from the playing on the Internet of a video recording showing the brutal manner in which they arrested me.

Our only “crime” is to think immeasurably about the fate of our country, which for more than five decades has been in the throes of a ghostly and exhausting war, which has only served to devastate a nation and to keep you in power.

We have the unquestionable right to choose, to dissent, to gather together, to speak out, to decide what is most necessary for the Cuban nation and its future. We ar its legitimate children, with equal rights, so we demand respect and freedom for those who make up the opposition within the Civil Society in Cuba.

Right now, still arbitrarily detained under an alleged crime of “resistance,’’ is Antonio Rodiles, Director of the Independent Project of State of SA (Estado de Sats) and Coordinator of the Campaign For Another Cuba (Campaña Por Otra Cuba), a citizen initiative born in the deep social and economic crisis we are going through which demands the ratification of the UN Covenants, signed by your Foreign Minister on February 28, 2008 in New York City, and that we consider essential rights for the democratic transformation of the Cuban nation and its entry into the community of nations in the XXI century.

We therefore demand the immediate release, without manipulated charges, of Antonio González Rodiles, and I demand of you the earliest intervention in the ongoing violations in our country that are committed in your name.

Translator’s note: Between the time Angel released this letter and TranslatingCuba.com translated it, Antonio was released.