In the past few days, I wrote about architectural horrors, today I am going to dedicate this post to the aggressions committed against our monuments.

Walking through the neighborhood of El Vedado, as always with my little camera in hand, I stopped to look at the little park that splits the road in two.

There I was observing the state of abandonment and deterioration of the green spaces and painfully I could see it, the pillaged base of a sculpture of the famous musician Johann Strauss, covered in gold leaf (too shiny perhaps for our strong sun), donated by the Vienna Embassy to the people of Cuba.

Without any respect, the statue was mysteriously removed, under the sleepless eyes of the always alert CDR (Committee for the Defense of the Revolution), something truly incomprehensible, since the thieves would have had to have a truck at their disposal to take it away and would have made plenty of noise separating it from its pedestal 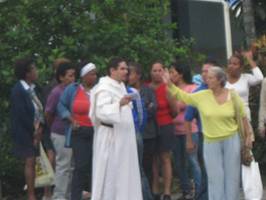 Also left there to the embarrassment of all, the stone with the dedication of the monument.

Unfortunately, this isn’t the only case, sometimes by theft, and other times by political motives, statues and parts of monument that shape the ornate history of our city have been destroyed, mutilated, and stolen. We remember the Maine Monument whose eagle was torn out, under the pretext of replacing it with a Picasanian dove that never arrived, as well as the statue of that President of the Cuban Republic, all that was left to remember him by was his pair of shoes. Also, they don’t have any respect for the sculptures and religious images of the Colón (Columbus) Cemetery, perhaps the most pillaged of our assets, considering by experts to be one of the most important necropolis, in design and monumental value, in the world.

I think it is the duty of all, to report these vandalisms to try to put the brakes on their impunity.