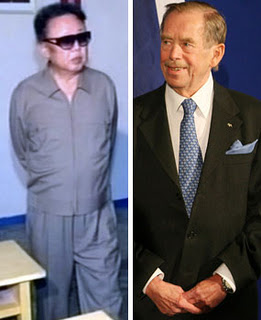 Two political leaders have died only a few hours apart. But aside from the timing, they wereÂ also incompatible in their ways of seeing life, acting and delivering for their people. One representedÂ Justice on earth and the other personified evil. The first, Václav Havel, was a born fighter, an intellectual and politician by nature, one of those who did not wait for moreÂ suffering to oppose one of the most ferocious dictatorships of mankind. For this he was persecuted, humiliated, put into prison and tortured. At the end he died from the after-effects caused by his daring to face aÂ dictatorship that suffocated its people. But at least his people knew how toÂ reward him, and today they mourn him, because he gave them the gift of aÂ free and prosperous country. He was President for the time he needed; he servedÂ his term and then watched as his country took off and developed.

The other death, of the dictator Kim Jong Il, we can’t call “human loss,” because for that we would have to have feelings that justify that category.Â He was no more than a tyrant, the most perverse and egomaniacal that ever lived. After his death, he left behind onlyÂ the suffering thatÂ all of his kind guarantee: punishment, famine and death.

Václav Havel was not content to seeÂ his countryÂ sovereign, but also fought for the freedom of other nations such as Cuba. In his personal geography the Cuban archipelago occupied a central place. HisÂ interest in the Cuban reality andÂ conditions for the Cubans was constant, and from the seat of his country in Havana, we felt the support of his Government for free thought,Â individual rights andÂ national independence.Â In us he saw himself in the years of dictatorship, in the current totalitarian state that we suffer. He felt at one withÂ us Cubans.

Kim Jong Il did not stand out in life other than havingÂ been the prince of this new type of dynastyÂ sharedÂ by North Korea and Cuba, the family legacy. His father, the dictator and mythomaniacal Kim Il Sun,Â guaranteed theÂ delivery of power to him, which his grandson also received, thenÂ is great-grandson. No matter thatÂ his country lacks food and freedom; the onlyÂ requisite is that whichÂ coincides with theÂ rest of hisÂ autocrat lineage: to maintain power. And before the general disgust of the civilized world, the Cuban government decrees national mourning for the vile tyrant.

At some point, maybe very soon,Â we willÂ erect the monument thatÂ Václav Havel deserves. We will lay flowers thereÂ for the rest of our lives, one generation after another. While in North Korea, they would tear down the statues of the Il family, givenÂ the opportunity.

We CubansÂ hope the Korean people will soon get their freedom, like we also want, and we wish them happiness. We offer the Czech peopleÂ our sincere condolences, andÂ we mourn their leader, aÂ friend who understood and accompanied us at all times. And we will mourn him for more than 72 hours.Â Â We willÂ mourn for eternity.