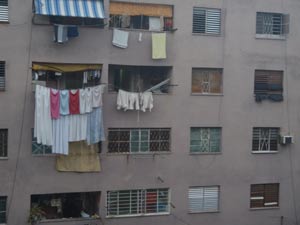 The last thing able to survive from our Cuban heritage is housing, owing to the totalitarian will of Fidel Castro, who dictated for more than 50 years that everything was his property and only he would decide what was whose and when it stopped being so. Fortunately or unfortunately, the family home was the only thing that couldn’t be sacrificed to survive the debacle that has lasted over 50 years. Soon that ban on the sale of real estate will be a memory.

In the 1980s, the Cuban people were robbed of jewelry inherited from their ancestors; the elderly, to satisfy their children and grandchildren and alleviate their extreme poverty, handed over their goods in exchange for a few “chavitos” [Cuban convertible pesos], which had value only in hard-currency stores, where the prices of the items were laughable. And everything worked like a robbery because there were no other stores where they could get these products, which were nothing special, other than the opportunity to acquire them.

Having dollars in those days could send you to prison for many years. People were confronted with the perfected gears of a governmental blackmail, which left some in bad shape, those who refused to sacrifice the memory of their ancestors for their family. In the end, the old women who gave up their engagement rings, relics that they exhibited on their hands as a window into profound feelings, did it with a mixture of pain and satisfaction, to please their families. They were left with the perception that they were duped like the Indians at the arrival of the Spanish, when they traded gold nuggets for stained glass.

The State also bought their porcelain vases, silver and gold, paintings that their ancestors hung on the walls to admire, design furniture, wealth that went into the coffers of politicians or their families and that now rest in safe deposit boxes in foreign banks. If I may say, it reminds me of the Jewish Holocaust, where they even removed gold teeth by force.

Cuban society has been sacked spiritually and materially, like the cane, which is repeatedly passed through the mill, where it loses consistency, becoming bagasse and powder. What’s painful is that everything happens in total silence, under the auspices and complicity of Cuban officials and intellectuals, who don’t comment because of the fear that always accompanies them in their artistic souls. They remained silent before the grand theft that exchanged jewelry for bread. For once they didn’t fulfill the role, so vaunted, that makes intellectuals the voice of society, its defender, its living memory. Instead, they preferred to turn their backs on the people, and history will recognize this in its righteous assessment.

But circumstances have changed so much for the ruling elite, that it has no choice but to revise its extreme methods and wave the flag, always for the sake of its benefit, ignoring the repeated and lengthy speeches that claimed that “private property will never return to Cuba.” Have you ever wondered how much pain it must cause Fidel Castro to see how the whole house of cards he forced us to visualize is crumbling? He wanted us to believe it as if it were true and palpable. What must be happening and what plans do they have for beginning to return some small freedoms that they took away before and that makes them feel they are losing their valued power? Surely it’s the same feeling of helplessness  the masters felt when they were forced to free their slaves. For let’s not deceive ourselves, no measure of this Government will ever improve things for the people, not even to restore the freedoms and rights that correspond to being human.

The right to be born….in the wrong place?

Now the government has approved the sale of houses, something that had already been announced. But it’s also been more than a year, as “by chance” they began in Cuba, after 50 years of stagnation, to update the property registrations. Everything has been done with the utmost urgency. It has been a so-called mandate for the state enterprises, with the inescapable management of citizens for any procedure involving their homes. In each municipality offices were opened to enter into the books the names of the current owners, with extreme urgency and pressure. They know that time is running out. The locals have handed over premises for these offices, given training courses, printed flyers that have been corrected, and delivered computers, files and office supplies. Visits by the Provincial Director of Justice and political officials are constant. They also are pressured with other requests. They have to answer for how much the total climbs when they get an entry on the books. The first person who began this task, as part of his duties as Prime Minister (Mayor of Havana), Juan Contino Aslan (may his small power rest in peace), was dismissed and now is on the “pajama plan,” (like his predecessors and political mentors, who allotted houses to their mistresses).

The Government of Cuba never makes a move that will not bring it compensation. But in this case, all the trappings lead us to the true intent, which is to take back the properties belonging to the old owners, who have left the country or died in Cuba.

The goal is to erase the past. When the State gets in its possession all the old properties, it will make them disappear and, with the registration, only the updated properties will remain. No property owner whose property was “nationalized” beginning in 1959, nor their heirs, will be able to reclaim something that doesn’t exist and that they can’t prove officially.

Perhaps some have conveyed their properties from exile, but they were the minority. And you might think it’s a commendable gesture of the Castros to assure Cubans that they will not be thrown into the street when the inevitable political change appears, but that would be naive. The real reason is that the power elite is trying to hide the family estates that were seized or inventoried after the departure of their original owners. Inside the great mountain of paper that contains the entries, the personal properties will be lost. By the way, this will reassure the generals and acolytes that they will not lose the confiscated property given to them when they came to power.

The country is bleeding

The Cubans, in this carnival of small, unknown freedoms, in their desperation to change their reality, in the desire to fulfill some dreams, especially that of emigrating, now can sell their homes. Those who wish to stay on the island immediately think about how that money will solve all their pressing needs: eating, dressing and sleeping without the torture of not knowing what you will eat the next day. The government is already warning that it is “not responsible for the bad decisions of owners who spend the money and end up in homes in poor condition that may fall down, or for those who are wandering around without a roof over their heads.”

Once again, we wonder what function this supposed revolution had, which presumably was made to guarantee people a secure life with equal rights. What do we gain from suffering a dictatorship for more than 50 years, if at the end we find ourselves selling the only things we posses, the only things we could keep? And what’s worse, it’s a “socialist” state that has nothing to do with its people, who were its only standard and justification in this long march of agony.

As a child, we thought the “coconut” would come for us, for our body; it would come to take us away for not eating all our sweet potatoes, or for not going to bed on time. After growing up we knew that the man with the bag, the bogeyman, had passed through our lives, and he took in his bundle more than wealth and family belongings. He took the lives and dreams of my grandparents, parents, siblings, friends, those relatives who still grasp me with their nails and their teeth so they won’t be snatched, and already he controls my children and now, if we permit him, our grandchildren.

The Cuban State, for more than half a century, has held up the monster of “capitalism,” which it constantly criticized, to children who were frightened that the “coconut” would come, and by studying so thoroughly the original, it now has become the reflection and has converted itself into the image of “the bogeyman who is coming to take us away,” in order to frighten us with capitalism as communist propaganda.

We Cubans have been scammed. The socialist State is slowly giving way to ideas with which they can perpetuate the dictatorship, a frank regression to capitalism. With the difference that now it will be more vulnerable, because there is no knowledge of either family or social infrastructure, which is necessary to meet and sustain a dignified life.

The big difference is in who wins at the considerable sacrifice of millions of Cubans in this more than half a century. The Castro family lives in luxurious mansions They own several cars and yachts. They travel constantly and have prosperous businesses, fortunes and properties in other countries. They definitely enjoy an income that allows them to live like millionaires.

The beginning of the 21st century has begun to be their end. They sense that they are running out of time. The only thing I don’t know is how and what they will develop for the family to maintain its status and wealth, and to ensure, of course, that it will not be returned later to the Cuban people.

While they prolong the strategies for usurious benefits for the Castro family, the Cuban peoples’ dreams of freedom and a prosperous economy are put off and continue being deferred.