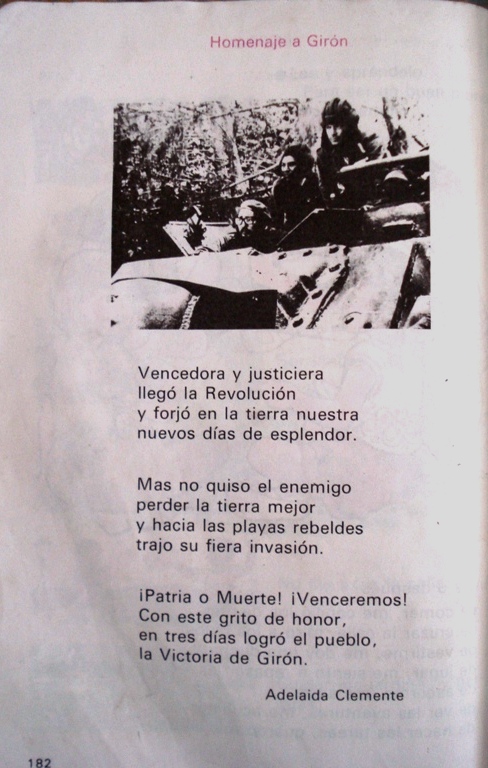 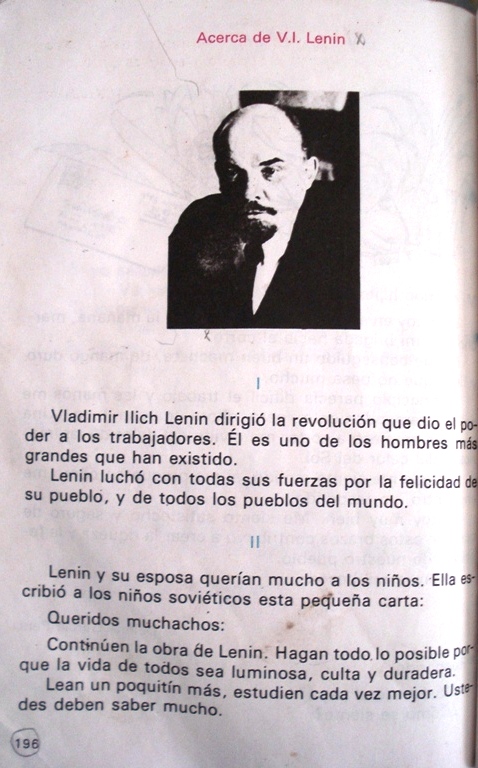 A few days before the start of the new school year I was browsing my son Malcom’s school books and it seems to me he is going to have a heavy weight to struggle through. My wife and I bought colored jackets and cut our pieces of nylon to cover them, and pasted some little figures on them so they would look better. But what worries me is not the outsides, but rather the venomous burden he will receive in the next ten months.

His second grade reading book is infected with cartoons with militias, photos of Camilo Cienfuegos and Che Guevara, an Abel Santamaría, the Moncada barracks, a high contrast black splotch that must be Fidel Castro jumping off a tank at the Bay of Pigs… and a thousand more slogans.

In the ruckus of the mornings to come his teacher will inject him, as if fulfilling a sacred duty, what she herself was injected with over nearly half a century of existence: hatred of the enemy, love of the leader, attachment to an ideology that at his age he can’t evaluate as optional.

In the middle of the new school year, the textbook — “which, as a sign of revolutionary benevolence, they have not made us pay for” — we see the lessons for April (a month that reminds me of the flowers the poets talk about), in which my son will have to forcibly repeat that yes, he wants to be like Che Guevara, while he salutes with his open hand to his forehead. Also, in October he will have to complete the Camilo-Che Lesson, where they always talk more about the latter.

It is a trap against the innocence of his nearly seven years. Banners with images of “The Five,” spies imprisoned in the United States, the television jingles that are not commercial but ideological, in short, a fence that it will be very difficult to escape from without a scratch. It will be up to us at home to speak of spring and winter, the pollen of the flowers and the stars of the night. Similarly we will have to bring him down to earth to teach him to plant the trees that will give shade, flowers and fruits tomorrow, and to try by any means to teach him to be a good man. It will be a long and thorny road.