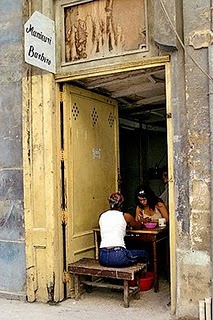 ALL NIGHT I LISTENED to my neighbor’s wife weeping. At intervals she claimed to be tired. Very tired, she insisted. Most of the time her husband wouldn’t respond, but when he did, he agreed: me too. Then she would moan, in a choking way that called to mind the crying of childhood. My anguish grew and dreams escaped me. I got used to it. The lament came to seem like inevitable music.

In the morning the sound of hammers makes me look out the window. My neighbor, the husband, with his two teenage sons, is making a raft from several empty tanks. I looked on the roof and they no longer have anything to store water. The wife spends the whole day shut in the house. She doesn’t open the windows, clearly so as not to watch the preparations for the family’s escape.

By the afternoon they already had the vessel ready. A refrigerated truck came to collect the raft. The three men went into the house to say goodbye, one by one. They came out even more sad, as if it were possible to increase the burden of so much anguish.

Before closing the refrigerator door they looked back at the house, perhaps hoping to see her one last time. But she didn’t look out. They gave the money to the truck driver, who then counted it and they took off. When the neighbors saw the dogs running behind the truck they couldn’t understand their desperation.

Long days passed and she remained shut up inside her house. From time to time worried neighbors called on some pretext, but she didn’t answer.

A sister who came from the countryside broke down the door. The doctors assured them that her family still hadn’t put the raft in the water and that she had been poisoned.