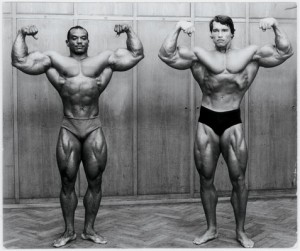 On Sunday morning November 21 you could hardly walk down Galiano Street in Central Havana, as expectation reigned in front of the American Theatre, home of musical and comedic performances, now converted into a Coliseum of muscles by the Cuban Association of Bodybuilding, which held its gala Challenge of Champions, broadcast on the sports channel of national television, something unusual since athletes who cultivate the aesthetic of the body are not yet officially recognized.

Those of us who could not get to the ticket sellers window of the theater went to the scalpers, who offered them for two CUC, equivalent to two dollars, an acceptable amount due to the rarity of the spectacle, distinguished by the initial parade of athletes, finalists of the previous year who took the stage together and then, to the beat of the music, everyone did their performance, while the jury made notes and the audience clapped or whispered.

Since in Cuba there is both a provincial and a national competition, which designates the winners by weight class, (65 kilograms, 70, 75, 80, 90 and over 90), all the champions have the right to appear at the Gala of the Challengers, with the goal of appointing the best amongst them, making the event the most important and colorful as it will select the Absolute Champion, recognized as the most comprehensive body builder on the island.

Between the National Championship and the Challenge of Champions is a time of preparation, as these athletes depend on fitness, a specialised diet, will and self-esteem as the essential elements.

Competitors are not measured by strength, size or age, but by a set of requirements such as muscle mass (volume), definition, symmetry, harmony and vascularity.

On Sunday the 21st, the jury appointed by the Cuban Association of bodybuilding chose five from among the champions presented at the match of the Challengers. First place went to Tony, who also won in 2009 and retains the scepter of Absolute Champion. He was joined at the top by Trinquete, Miguel Castro, Tomás and Alburquerque, winners of the 2nd through fifth positions, respectively.

Leaving the American Theatre, while photographing the Champion and trying to ask his last name and other details, I thought of the enormous challenge of these athletes of the sculptured bodies, excluded from official competition, lacking a national team and representatives within or outside the island, without travel or help to support their small gymnasiums, and classified years ago as lazy and narcissistic.

They lack support but compete for love, obtain public spaces, self-finance their training and events, have their own NGO (ACF) and legendary figures such as Miguel ‘Smorgasbord” Cambolo, Maximo, Ariel Flores and the legendary Sergio Oliva, Cuba’s most emblematic bodybuilder, former member of the national weightlifting team, who emigrated to the United States, where he won the Mr. Olympia prize between 1967 and 1969 and lost in 1970 to Arnold Schwarzenegger, a paradigm of success and a patron of the sport in North America and the world.