What about the wages of who officers who guard correctional facilities?  Do they traffic in narcotics and various benefits?

HAVANA, Cuba. – The ingestion of alcoholic beverages and psycho-pharmaceuticals is a very common vice in prisons, encampments and forced labor penitentiary settlements.  They provide, moreover, a business that is carried out day by day, in most cases, by prisoners with financial power.

Innumerable civilian workers and officials of the MININT (Ministry of the Interior) have been sanctioned in tribunals for the crimes of bribery and embezzlement.

There is a multitude of problems within the prisons and encampments: fights, bloodshed, theft, self-harm, escapes; these last are well paid-for to MININT’s civilian and military workers.

Life in the penitentiary settlements is incomparable to that of the jails.  They are workplaces or warehouses that belong to MININT. The quantity of prisoners that must inhabit them is reliably between 15 or 20, or those that bribe the re-educator of the prison or encampment.

Business is different in these places. The prisoners are privileged. Once they arrive they are free to do what they like. The supply of psycho-pharmaceuticals, alcohol, and the illicit businesses are not controlled. They may go outside the area when they want, ask permission to go to their homes and other benefits provided they bribe the guard and the officer.

The defenseless prisoners who report these outrages are exposed to reprisals, threats, severe beatings, shakedowns, punishments cells and prohibitions of their rights. They subject them to physical and psychological torture to make them shut up.

The inmates who do not allow themselves to break continue informing the independent press, which is their only means of defense.

When the punishments do not break them, they take away family visits and then transfer them to other prisons, some more than 200 kilometers from their families.

Another method that the guards use is to incite prisoners to physical attacks or accuse them of crimes not committed.

The heads of the Bureau of Prisons, Encampments and Forced Labor Settlements, within and outside of them, are not able to control this fully corrupt environment. Something is wrong when there is so much corruption. 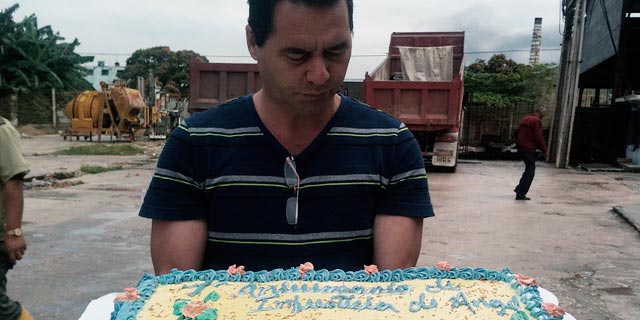 HAVANA, Cuba, January 7, 2014, Dania Virgen García / www.cubanet.org.- From the  Lawton prison settlement belonging to the Interior Ministry (MININT), a center that oversees construction materials for the manufacture of military housing, writer Angel Santiesteban Prats told this reporter that he is being subjected to arbitrary measures, and harassment.
On 4 January, a group of 19 prisoners was released on passes — prisoners who are being punished for crimes such as drug trafficking, murder, fraud, arms trafficking, economic crime, and human trafficking, among others. Santiesteban was alone with two guards and was watched around the clock. Shortly thereafter, in order to reinforce the monitoring, a jailer was sent from the Valle Grande prison, who stood in the doorway of the barracks from four in the afternoon until the following morning.

From the time he arrived, the new jailer watched him with suspicion, and the writer saw him several times, especially in the morning, watching him through the window of the barracks. This continued until the next day .

On the morning of the 6th, this jailer was reinforced with the arrival of another. The two guards are standing next to the third guard at the entrance of the barracks.

With the two mentioned above this is the fifth time the writer has been subjected to this arriving at the prison settlement on August 2nd. The famous artist accused of domestic violence and condemned to five years in prisons, expects to be subjected to an additional guard in a few days.

HAVANA, Cuba, October 24, 2013, Dania Virgen García / www.cubanet.org.- The opposition couple  Sonia Garro Alfonso and Ramón Alejandro Muñoz González , along with Eugenio Hernandez Hernandez, will be tried on Friday, November 1, at 8:30 am, in the special chamber for crimes against State Security in a closed door session. The chamber is located at Carmen and Juan Delgado, in Vibora, in the 10 de Octubre municipality.

Both opponents have been subjected to physical and psychological torture for a year and a half. Sonia Garro in the El Gautao women’s prison, to the east of Havana, and Muñoz at Combinado del Este on the other side of the capital.

The defense will be chaired by Amelia M. Rodriguez Cala.

HAVANA, Cuba, September 6, 2013, Dania Virgen García / www.cubanet.org.- In the National Prison Hospital (HNR) of Combined del Este prison in Havana, there are 15 confirmed cases of cholera, according to the inmate Daniel Perez Diaz, who is admitted there.
According to Perez Diaz, on 2 September there were 15 confirmed cases receiving hospital care in the HNR. In the intensive care ward there are twelve inmates in serious condition

Patients with different pathologies admitted to the intensive care ward of HNR, were transferred to open rooms without considering the risks of contagion that this could bring. The responsibility for this was the decision of the Ministry of Interior major Dr. Alexis.

On day 2, while Dr. Alexis visited, he stopped at the bed of inmate Daniel Perez Diaz and told him he was not interested in his cure, he announced he would not give permission for any other facility to treat him, calling him “counterrevolutionary” and threatening him with beatings for furnishing information to those he called “cheap journalists.”

Havana, Cuba, July 25, 2013, Dania Virgen Garcia / www.cubanet.org.  A reliable source who asked to remain anonymous for reasons of safety — it is clear that this source is not political prisoner Sonia Garro, illegally confined in that prison — said that those who provoked the riot in the Guatao women’s prison west of Havana this last May 26 were male and female officers of internal order.  These had been transferred to other prisons without being prosecuted for incitement to commit crime, among other crimes that were sanctioned by military laws.

The source blames the riot on the first petty officer of internal order, Yunieski Figueredo Garcia; Yasnay Velez Hariarte, Chief of Re-Education, transferred to prison 1580 in San Miguel del Padron, a municipality where they conferred on her an apartment near this prison; Ismari Torres Pexidor, re-educator of detachment 3; and the chief of internal order, Rosaidi Osorio Palmero, alias “Iron Lady,” who was transferred to the prison Valle Grande.

All those mentioned maintained strong corruption with the so-called White Collars.

The deputy warden of the prison, officer Betty, was transferred to the National Direction of Jails and Prisons, located at 15 and K, El Vedado, in Havana.

The six prisoners who initiated the riot, most very young, still are in the Manto Negro women’s prison.

According to the source, “They sent the worst management team from MININT (Ministry of the Interior).”

The new head of the prison, Major Sara, was previously the second.  She arrived sanctioned by another prison. Until she serves out the sanction, Lieutenant Colonel Diaz is standing in for her.

Yunieski Figueredo, alias El Negro, husband of the chief of internal order, Rosaidi Osorio, still continues in the prison as if nothing had happened.  This deputy receives the new inmates.  He is accustomed to harassing the prisoners to force them to have sex with him.

The source alluded to the fact that the White Collar prisoners, who run the economy and finances in the prison, were prohibited from exercising their duty and were replaced by officers who had no experience in the matter.

One group of prisoners who worked in the “Luis Ramirez Perdigon” military school dealt with the location of prisoners in the penitentiaries as well as other military details.

Now, the White Collars are located as cleaning helpers in different Havana hospitals, like the Surgical Clinic, the Pediatric “Juan Manuel Marquez,” Calixto Garcia and the Oncology Hospital.

The Guatao prison hosts more than 100 prisoners for economic crimes, embezzlement, corruption and theft in customs packages, among others.  Every week women with these crimes enter.

“Lieutenant Colonel Diaz is racist,” assured the source.  She refers to fact that the jailers who direct the leading platoon, who are mostly black, were replaced by white jailers, which has inconvenienced the officials.

She said that the prisoners who are pregnant or have recently given birth, who are in the galleries of the Manto Negro prison, live in extremely deplorable conditions. The galleries are very humid due to the seepages in the walls and roofs.

She indicated that in the Guatao prison there are two jailers who belong to the repressive rapid response body that put down the Ladies in White; their names are Yarelis Hernandez Herrera and Maria Pedroso Herrera, both deputies.

The former director of the Manto Negro women’s prison, Lieutenant Colonel Mercedes Luna, was promoted a couple of years ago to the National Directorate of Jails and Prisons (15 and K).  Now she is serving on an international mission in the Republic of Angola.