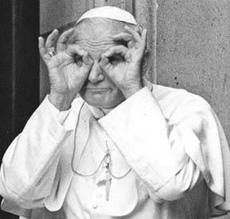 The hardest thing for me is to address this letter. I don’t want to start with “Excellency” or “Your Holiness,” or put your first and last name, or your title of Pope. Since I don’t know how to do it, I apologize and will do it the Cuban way. First I have to speak to you in the familiar first person — with “tu” instead of “usted” — and second I’m going to familiarize your name. They told me in Poland they call you Tio Loleck, Uncle Loleck, but that doesn’t work here. For example, Ernesto Guevara we nicknamed “el Che,” Mikhael Gorbachov we called “el Gorbi.” and the Virgin of Charity herself, whom you will crown in Santiago de Cuba, between the threatening swords that point at the sky in Antonio Maceo Plaza, Her, we call her “Cachita.”

And so, meaning no offense, I name you “Woiti,” with affection.

The other thing I have to clarify for you is that people like me, who are around forty, we who were born in the Revolution, we have little occasion for religious faith; many of us have never been baptized because our parents wanted to join the Party, because that was where it always went best, but the Heart of Jesus always remained behind the wardrobe door, or there was a caracol under the bed, always, after that infallible “materialist cosmovision of the world” that they inculcated us with, we were left with a little doubt, it was our way to a little faith.

One day they held a Congress and religion was no longer merely “the opiate of the people” and you could be a militant Communist and a believer. Of course, that did nothing for those religious coming into the Party, but for those who were already in it, they could take off their atheist masks. With this end of the ideologies, many people were left with nothing to hold onto and they were thrown to their fate on this Island, and we had the joke that the most important thing is to have FE (faith), and the two letters of that word stood for Family in the Exterior.

Woiti, you have seen hunger worse than ours in other places in the world, you have known totalitarian repression worst than ours, religious persecution, massive exiles, lack of freedom, imprisonment, torture, lack of hope, crisis of values and many more problems, at levels so high that it might seem to a Rwandan, an Iraqi, a Guatemalan, or a North Korean that this is paradise; but these are our own and almost nothing we can do from within can relieve them. Fortunately you don’t represent a military power. As far as I know, the Vatican has never paid spies, nor engaged in terrorist, nor imposed a blockade, nor dropped bombs or bacteria on any place in the world.

So can I ask you to throw us a rope, and because you talk with Him, because he He receives you and hears you. Tell Him, that his flock does not want to continue to suffer, that we want to regain our individual dignity which we had to give in exchange for a national dignity that can only be seen for outside, in those solidarity clubs and in the headlines of our newspapers.

Hopefully we will not remember your visit only for the roads they fixed for your to pass along them, or because, perhaps, thanks to you, we will get to celebrate Christmas in a normal way again. Hopefully you will open a space with your presence. Hopefully He will hear you. Hopefully in your mouth our prayer is made audible.

Throw me a rope, Woiti!

This article is on page 53 of the Cuban independent magazine Voices 14, published 23 March 2012, in Havana, Cuba.