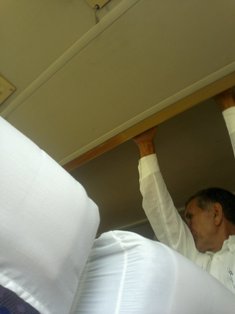 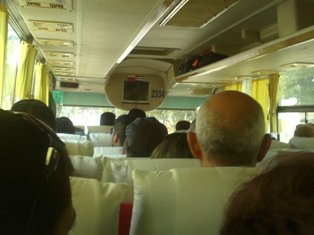 This Saturday my husband, Ricard Medina, and I prepared to journey to Camagey with the objective to then proceed to Santiago de Cuba where we wanted to participate in the Mass that His Holiness Pope Benedict XVI would offer in the Plaza of Antonio Maceo. We left on 2 pm bus that arrived after 11:00 pm in Camagey. We went to the house of Irel Gomez Moreira, delegate of the Cuban Independent Democratic Party, who lives in Palomino Street at No 621, as we had a work plan to found a delegation of young members of our organization in that area.

When we arrived we found a little suspicious that a Lada made car was coming very quietly in front of us in those very desolate streets, itwas apparently a couple. The next day, or Sunday, we got up very early to start all the agreements and were leaving the house at 6:20 am when a man dressed in civilian clothes and in quite a rush intercepts us on the road to ask for our identification. On the corner the same Lada car was waiting, with the same woman and man; we demanded they show us their IDs, they wanted us to get into the Lada but we refused because if they were going to arrest us let them take us in a patrol car along with Irel.

They took is to the State Security (G-2) Operations Center. It was so early we noticed that the guards were just getting up. They took us into a room in the structure that I imagined was used for people arriving in the cells. An official called me and in a small room began to inspect me and let me alone with the toilet and clothes. A lieutenant came in to search my body. They took me inside where the cells were, and in an office a woman no more than 25 ordered me to take off all my clothes, which I refused, she told me that if my bra has underwires she had to remove them because I couldn’t go in the cell with the wires because if I killed myself it was her responsibility and she would have to face the military prosecutors.

I took off my bra under my blouse and she tried to break the wires and I told her to give it back, it belongs to me but I wasn’t going to break it. The young woman did as I said and didn’t insist, and then she called “control” as they call the jailer, and he took me to cell 3 where there was a woman on the edge of madness because she’d been there more than 12 days for an economic crime and had high blood pressure. Then she saw me and we started we to talk and I asked her why she was there and she desperately started to tell me everything.

Within minutes they took me out of the cell, a guard called me by the number 96 to which I didn’t answer, and he told me, upset, that I was deaf, he was calling me, and I told him I had a name and that I didn’t answer to numbers for anyone and not to bother me calling me again. He took me out and a major named Fernando, according to him, showed me Ricardo’s cell phone that has various Twitter text messages from some friends informing us hat there was repression around the Pope’s visit and he said they were inciting us to go to the mass and shout “freedom,” and I started to laugh and said, look, search the Internet, these Tweets are from our friends, stop being so scared, because even the word “freedom” upsets them, this is a right that is born in all human beings and in you too and they took it from you, too, and the guy slapped the table and said look, read this order of detention and sign it.

When I read it, it said that we were arrested for disturbing the peace, of course I refused to sign it and he, greatly annoyed, ordered them to take me back to the cell.

An hour or so went by — in a walled cell it’s impossible to calculate the time and I couldn’t see a single ray of light — a guard came by, the same one that checked me in, to bring me a mattress, I said you brought me here without a mattress, without food, without water, I’ll let you watch me and I went to bed with my back to the door as if I didn’t care at all about a wooden bed in the corner.

After a while they brought a doctor who asked if I suffered from anything, I just answered that yes, I was allergic to her Revolution and to olive-green. She just looked at me, took the blood pressure who was there and left with her very quickly.

In a few minutes they came back and took me to an office where I waited for the Chief of the Jail who told me I had to answer a series of questions that Major Fernando would pose and then everything would be resolved and they would take me and my husband to Havana.

They left because there were more guards in the office where they took me and one asked me what we were doing in Camaguey and what did the Cuban Independent and Democratic party do, from where we knew Irel. I told him I was in Camaguey because as a Cuban I could go wherever I wanted in Cuba, that I knew Irel just like a knew a ton of people in Camaguey and that the party I belonged to wanted to have free elections and that there i a multi-party system that respects Human Rights and doesn’t put women in dungeons for the way they think and express themselves.

The man, upset now, asked when I was last detained, I said last Sunday, and he said this makes you feel really strong, right? And asked how much schooling I had, I told him Technical School, I graduated in Clinical Biology but I couldn’t continue my schooling because — according to the regime — I wasn’t “reliable.” He opened to door and told the guard to take me back to the cell. Then he immediately turned to me to sign a report about what, according to him, we said, a report I refused to sign and so I put I REFUSE, and they quickly got me out of there because according to them there was no time, they returned my possessions, searched us minutely, and took Ricardo and me in big Lada that said G-2, leaving us at the National Astro bus station.

I asked them for money for the tickets, they delayed the bus for 45 minutes, all the people on the lookout and the official escorted us the entire trip, carefully watching our every step. Arriving in Havana at a stop near our house, in Manglar, we got off unexpectedly leaving the man who was guarding us unable to react.

Thanks be to God we are home and thanks to all my friends for your concern and your Tweets.