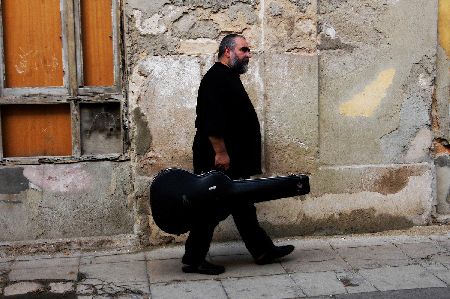 The singer intones one of his old songs on the stage. The public presses closer, repeats the chorus, is moved to delirium. This week we’ve enjoyed one of the many festivals of trova music that have begun, this time, in Santa Clara province. With themes ranging from the romantic to the most contentious social issues, the event allows to to hear some happy new releases and other well-known compositions. Musical creation that had its golden age in the seventies, but that its now losing ground to more commercial and fast-paced melodic forms. Most young people don’t want to hear trova ballads with lyrics that speak of complaint or daily chronicles, they prefer to relax and enjoy themselves, to abandon reality, if only for one night. They go to the clubs to escape what is outside, not to be reminded of it. So those ideological tunes — alluding to the New Man or the society he will inhabit — have been thrown into the well of forgetfulness.

Despite the loss of popularity, there are still dozens of cultivators of the trova song tradition in Cuba. They sing for people who prefer to ponder daily life and its absurdities rather than run away to another dimension. There are also many of us who still shudder at the lyrics of Silvio Rodriguez, separated as we are from him by an abyss of political opinions, a ravine of philosophical positions. When it comes time to organize our musical — or literary — libraries, we’ve learned that the best idea is not to do it by party preference… if we don’t want to suffer the sad loss of numerous authors.

Beyond the quality of the chords and verses, a good part of the public seeks in trova ballads their ability to evoke past memories: a first love, a close dance, the difficult years, that day of the first kiss, or the concert where we met someone very special. They trigger memories, like Proust’s madeleine, but which enter through the ears rather than the palate. When the singer appears with his guitar in hand, he is, in reality, engaging us in an act of remembrance: taking us back to those times when we were so young, when Nueva Trova had not yet been totally faded by the acid of reality.