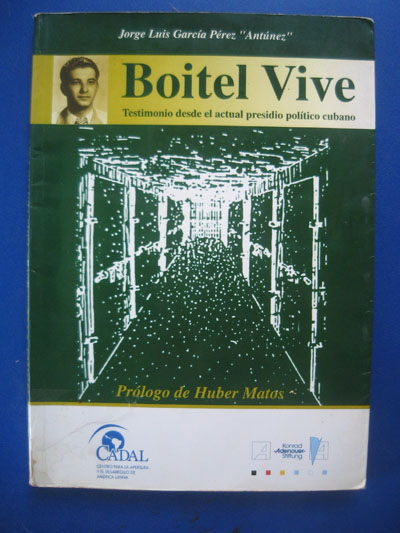 Everything I am capable of writing, again makes me sound so naive until I translate this fury I hold onto. And this is what we can say is the real horror of the Cuban Revolution, outside the political prison, the sin of naivete. What happens when, in a society, it becomes widespread conduct to ignore responsibility, to convert the individual conscience into a collective conscience dictated by the figure of a leader with no fear of God and without respect for men.

This is the Revolution and the degrees of villainy increase from the most public spaces to the most “exclusive” which are the Cuban prisons. Jorge Luis García Pérez “Antúnez” has a book titled “Boitel Lives.” It is a testimony of his lengthy political imprisonment, of the beatings, the real hell of the Cuban prisons closed to the rapporteurs of the International Human Rights Commission, the Red Cross, and Amnesty International.

It is so easy to offer a moral discourse, as he has done all these years of the Cuban Revolution. It is so irresponsible that much of the world wants to confuse his protests against the wars of the Pentagon with support for this Revolution, which has imprisoned so many men and women… for the crime of persevering in their existential freedom, of conscience, and their responsibility for themselves and for others.

Cuba is not a good place to live. It’s terrifying in the sense of the insecurity of the individual faced with the ruthless machinery of the State that does not truly represent us and condemns us if we don’t serve the interests of keeping power in the hands of the worst plague in the history of Cuba. I can only commend myself to God, but I will not shut up. The darker this evil that plagues Cubans the more hope I have in Christ, the Son of God, Savior, who knows suffering and will always create a path of salvation for us.