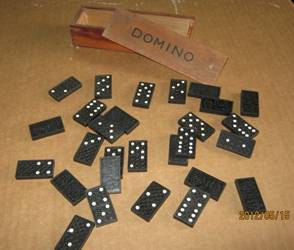 On my planet dominoes have been and continue to be the most popular table game.

Game played with twenty-eight rectangular tiles, generally white on the face and dark on the reverse, with each divided into two squares, each one of which is marked with from one to six dots, or with none at all.

Thus says the Volume I of the Encyclopedia Espasa-Calpe, sa. Madrid 1035 (third edition).

But we Latinos, we like to do more complicated things, we add to make it fifty-five tiles in total, and there reigns the dreaded, unwanted, hated and sometimes loved double nine.

I remember papa Manolo, Cubanized-Asturian, passionate lover of this game, who for many years proudly wore a belt with a wide buckle of silver and enamel that said champion. In the first years after 1959 he sold it, who knows for what paltry sum of money, to put food on our table, back in the seventies when we could barely manage one meal a day. All this led me to think that our country, by the work and grace of a personal utopia, was becoming a metaphor for this game:

Double Standard: To express in public the exact opposite of what you really think, and say, behind closed doors.

Double Currency: One, with which they pay our meager salaries and retirements, which has barely any value, and another which, even though it’s only good inside the country, at least can be used to acquire most of the basic necessities, and that must be gotten and spent at your own risk.

Double Health: One very precarious and lacking in resources, which is offered to the people. Another more specialized, with a wide range of medicines and better facilities for the leaders and foreigners.

Double Education: One very deficient, with schools in a terrible state and most improvised teachers. And the other with very good conditions and qualified teachers for the diplomatic corps and a very few privileged Cubans.

Double Market: One, with little variety in products and prices extraordinarily inflated (more than 250% of costs), and the other in the so-called Cuban Convertible Pesos.

And another only for diplomats and senior leaders, with more varied products and better prices.

Double Migratory Law: One, draconian and violating human rights, which is applied to the population in general, and another, more expedited and economical, that favors only the leaders and high officials.

Double Supply: Almost nothing for the people’s markets, and another with home deliveries in record time, for the ruling elite and selected officials.

Double Justice: The surprisingly cruel, pompous and media focused applied to citizens who violate the law, and another quiet, almost secret and less aggressive, applied to officials who have committed crimes against the economy.

Double Information: One, transmitted to the population through all the official media, and another of antennas and Internet, fiercely persecuted, which only a few privileged have access to.

As you see, there are various doubles. Now we just have to focus on the table, calculate how many tiles are still to come, and above all, try to guess who is crouched over the double nine, because in any moment he can play it and that’s the game!

As I told you, this may be the most uncomfortable and surprising tile, of this other twisted entertainment.