It is no coincidence that the women who struggle are called crazy,
because in reality they must underestimate something,
and this has been thus in the history of humanity,
because it is very difficult for them to recognize that woman also has a brain…
Elisa Carrió, founder of the Argentine political party
“Affirmation for a Republic of Equality (ARI)”, lawyer, university professor

For some it’s strange to relate Rosa Parks with the largest island in the Caribbean. The Rosa Parks Female Movement for Civil Rights was founded some time ago. Rosa Parks was a reserved and dignified lady who, in 1954, was arrested in Montgomery, a city in the south of the United States, for refusing to give up her seat to a white man. This attitude of hers, so disconcerting in those years, provoked an ongoing popular movement for civil rights in the United States. Anyone was far from imagining that her exemplary attitude would arrive in Cuba.

In the insular history there is a Pleiades of talented and ferocious women: some are most beloved as Mariana Grajales, the mother of the Maceo generals. We have heroines and famous professionals. Others are virtually unknown although they gave their all: their hair, jewels, their life, for the country’s liberty; however the concept of passive resistance was practically unknown in Cuba.

Rosa Parks is at Saint Rita Church as of the first march of the Ladies in White, known worldwide today. The indomitable spirit of Rosa Parks, identical, penetrates each gladiolus, each reunion, each step. No money could pay for the beatings and daily humiliations those simple Cuban women must bear, and even though the populace claim that one of them must be an agent of Cuba’s National Security, one must also certainly recognize, her suffering is double. To stand beside convinced beings must be very hard for a woman, be she mother, wife, sister, and at the same time a spy. The patriotism with which she could be adorned is of scarce value now, after all life will send her the bill.

In spite of the departure of the tireless Laura Pollán, first a grade-school teacher and later a human rights leader, the spirit of Rosa Parks, which does as it pleases in the rest of the country, now adds an extraordinary deed to the History of Cuba: the closure, for months, of the main entrance of the Havana Capitol, the most emblematic edifice of the Capital to all Cubans, constructed in the 30′s decade of the past century. 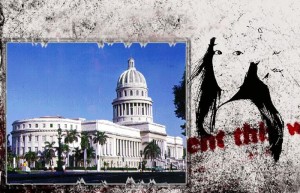 Four women from the Rosa Parks Female Movement for Civil Rights behave, apparently, like the boys and girls that rode skates and skateboards on the Capitol steps. With the same self-assurance and ruckus, they exhibited a bed sheet with signs that said: “Down with the Dictatorship” and “Long Live Human Rights.” Incredible!

These “cuatro gatas“, a mere handful of the Parks group, make history in August of 2011. Little did they care about the month of the “Maleconazo of 1994″, the so-called “vacations” of many with crumbs and hunger, the breaks on the beaches devoid of palms and umbrellas. Once ex-president Fidel Castro labeled “chicas locas” — crazy girls — those young women who prostitute themselves due to their unending squalor. Now (Thank you, Rosa!) nobody calls these four women crazy; at most, “dangerous”.

The Cuban capitol was partly to blame for all that transpired, constructed in the image and likeness of the one in Washington. Rosa Parks, from another dimension, once again felt the same as in the decade of the fifties. She believed the events were repeating and God only knows how the beliefs of these Cuban ladies were mixed with those she always held. The power of convictions and ideas is without discussion, so for now, the lavish entrance of the Capitol remains closed as of the end of August 2011.

Within the building, the Statue of the Republic awaits sad and lonely. Perhaps she believes that now no one remembers her, so famous for her beauty and size in her time. But no, we must convince her that we continue loving the Republic of Cuba, and although they insist that it is not so, the majority of the Cuban people comment between looks of complicity and kidding around:

…the Capitol still remains closed due to the repairs of:

There is no joke, nor does there exist, in my belief, any motive for laughter. The ladies of Rosa Parks have before them a colossal task. Each Cuban energy, within their means, will have to help them. Otherwise, some day we shall run into the Statue of the Republic crying in the Hall of Forgotten Steps. We allow the valuable metal of her body turn to mud.