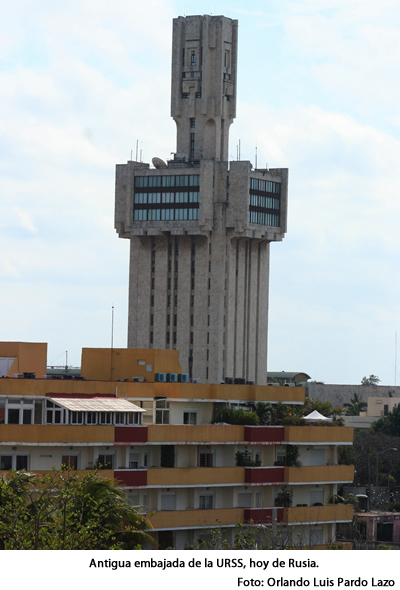 The plane touched down in the middle of a Havana night and the tourists pass through the international airport terminal where dozens of Cubans offer them taxis, rooms for rent, rum or mulatas. A young man approaches a short dumpy visitor and, squatting close to his ear, asks “Mister, you like cigars?” but the answer comes with a strong and well-known accent, that tells the daring vendor the origin of the traveler. These are the new Russians, who come not for business but for pleasure, who have stopped calling each other “comrade” and who now carry their Visas or Mastercards. In short, they seem less and less like those who for decades sustained our social experiment.

It has been over fifty years since the Cuban government resumed diplomatic relations with what was then called the Soviet Union. Those who lived through that time have told me it wasn’t easy to overcome the accumulated prejudices against the inhabitants of the first socialist territory in the world, those who were seen by many of my compatriots as part of an advanced colonization. Life demonstrated that the alarmists were not entirely wrong.

In the great naivete of our collective childhood there were no differences between Ukrainians, Turks or Lithuanians, as we believed them all a single extension ruled from the Kremlin. On the other hand, the cultural abyss between the homeland of Lenin and our fun-loving Caribbean island made one scholar admit that “Cuban and Russian hearts beat on completely different frequencies.” However, geopolitics tried to match us up, without much success. Unlike other European countries, where Communism rolled in with the tanks commanded by Stalin, in our case it came with a subsidy, with boats full of oil that called at the ports of this Island every month.

“The Russians are coming!” cried some, frightened, while others responded, “Welcome to the Soviets!” Choosing between one word or the other was, for a long time, more than a linguistic dilemma, it was the taking of an ideological position. When Cubans of my generation started to be aware of the world, in the early eighties, no one was tearing their hair out to choose between these two words that history had forced to be synonymous.

So we watched Russian films and rode in Soviet Ladas. The downtown restaurant, Moscow, disappeared in a mysterious and voracious fire, and to the west of the city they raised a hideous building that would serve as the headquarters of the USSR embassy, which we jokingly christened the «control tower» both for it architectural profile as well as its political evocations. Those were the gray times, when we kids lived trapped between the teary Eastern European cartoons and the interminable discourse of the then robust Maximum Leader.

At the beginning of the nineties, with the collapse in those parts, the official discourse eliminated the references to former mentors. They erased them from the text books and removed the photos of the leaders in the fuzzy hats with earmuffs from the Museum of the Revolution, while national history was rewritten downplaying the Soviet presence in our lives.

The cultural impact of this abrupt departure made itself felt immediately, especially on movie posters, where the American productions — and it continues today — pack the theaters and only rarely are replaced with the old classics distributed in another epic under the symbol of a soldier and a peasant girl carrying a hammer and sickle.

To the surprise of many, an agreeable surprise of course, television premiered the series The Master and Margarita based on the unforgettable satirical novel of the awkward Mikhail Bulgakov. On the national scene the Bolshoi Ballet — once the flagship of Soviet culture — returned to perform again and, according to those who attended, defrauded the demanding Havana public. But nothing is like that era when the memorandums flew from the palace of colored domes to our sober Council of State.

After years of little interaction, the visitors from the other side of the Urals have returned. They are no longer seen in large groups, dressed in pants always one size too big and white shirts with the sleeves rolled up to the elbows. They are no longer those foreign technicians who had the right to buy in stores prohibited to us, and who sold on the black market the trinkets they bought in those so-called diplo-shops.

We haven’t gone back to calling them “los bolos” — the bowling pins — that appellation half mocking and half affectionate, honoring the lack of sophistication of their industrial products, full of rough welds, divorced from aerodynamics and comfort. Now, the returning comrades of yesteryear compete in the discos, look like businessmen, and wear French perfumes.

They are entrepreneurs showing off their computer products, such as the well known Kaspersky anti-virus, before the astonished eyes of those who once saw them in their military uniforms. A couple of years ago they even had an exhibition area at the International Book Fair. Their shelves were filled with diverse topics, including self-help, with very few titles of Marxism and Leninism. They walk among us and no one screams in fear, “The Soviets are back!” Because it’s clear to everyone that they’ve returned and, swimming at our beaches or drinking a mojito in some tourist bar, they are — clearly — Russians.

From Cuba Libre on El Pais