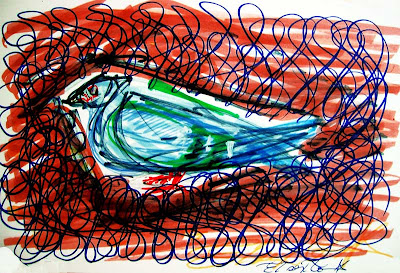 In these days of waiting for the Pope, everything around me is tense.

I start to leave my phone at home.

They followed me from before the presentation of Voices Magazine Number 14.

But it is only persecution, at least they want you to think.

I thought it wouldn’t be for some graffiti artist.

Occasionally I can slip out among my friends and shake off the guard.

Although it is a super uncomfortable situation and full of stress, it’s already so common for me to be followed by them they I’m not afraid and can shout at them, things like dogs, snitches, pawns, and so on.

I got used to it and, as my ex says, what doesn’t kill you makes you stronger. 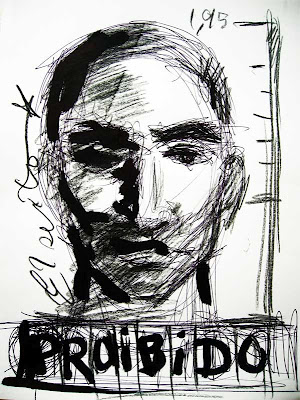 It was Sunday, March 26, my sister Indira’s birthday, and seeing State Security was barely 20 yards from my door, I didn’t want to leave the house. I took it as a threat not to leave. But they slept outside all night and that worried me a lot and I felt some fear.

The next day, March 27 at 1:00 pm I saw them at the corner of my house with cardboard in the windows of the car, so that the sun doesn’t bother them, I think. It was the same red car as the day before. I had to go out to make a phone call, I did, in shorts, a shirt and sandals, heading away from them. I’d barely walked 15 yards when I could sense them starting up the car around the corner.

They came up behind me, grabbed me by force and shoved me inside the car between two guys dressed in civilian clothes. Car rules: Hands between the feet and eyes forward! They snatched the phone out of my hands.

DO NOT TURN IT OFF! they said.

The car with three officers took me to Vedado, 26th and 17th, where they stopped, made calls on their cell phones, and in 5 minutes a Suzuki motorcycle and the usual “persecution car” showed up (a green Lada make with private license plates): with that Camilo. On the way he told me, “Today you’re playing Capablanca [the grandmaster] at chess.” Driving down Boyeros Avenue you could see all the “makeup” they’d applied, for obvious reasons.

I thought why are they doing this to me if they don’t want to damage the Pope, and I’m not some trash you can sweep under the carpet. When we got to the station at Santiago de las Vegas Camilo got out and when he returned they took me in through the back. As they were leaving me there a policeman told Camilo he was needed for another arrest. Camilo disappeared.

When they transferred me to the cells I saw a man dressed in black, a gentleman I would come to know later, it was Julio, the husband of Sara Marta, Lady in White, opponents from Rio Verde. As we were not in the same cell we were talking from a distance. He told me that he had seen me on the Estado de Sats program, and that he’d been there since Friday with eating or drinking water (a hunger strike). I was just starting my time and I felt bad already, but being locked up there for no reason gave me strength. Julio told me this his wife had also been kidnapped and he thought they had taken her to Cotorro incommunicado.

The next day opponents became to arrive from the Santiago de las Vegas police station, all on hunger strike: 14 in total, including 3 women whom I only sensed and heard their voices. Those of us there had opinions in common. The chorus of “Freedom!” became so strong we were encouraged to also shout “Down with the Dictatorship,” “Down with Raul,” “Long Live Human Rights”…

The police asked up please, if we wanted we could shout, but not to go near the bars. For us they were invisible. I met Bartolo, El Deje, all very affable and I felt find, because we talked as if we’d known each other all our lives.

The registered me as a criminal: many photos of my body and finger prints and something odd: the shoe size.

The next day I felt dizzy. I asked Julio how he felt and he said fine. I was taken to the doctor who tested my sugar, which was low as was my blood pressure. The doctors were worried, telling me, “You don’t have the physical strength to do this. Eat!” Nor am I a murderer, but I am here because you want me to be, I answered. On returning from the exam I gave to alcohol swab to Julio, he shook my hand but I felt he was sick.

In the evening I left the dungeon. There were about 20 patrol cars outside the station. Coincidentally Julio andI were put in the same car and they transported us. The order was to leave us a few blocks from our respective houses. He got out at Boyeros, near Mazorra, and I at Arroyo Arenas.

They gave me my phone and there were no texts or missed calls. When it rang it was the wife of Ismael de Diego, I told her I was already out. She told me that when she called my phone, an officer answered.

This is my humble testimony. I don’t people who had it a lot worse. The government should avoid and fear these hunger strikes in chains… Lest they kill more innocents and fall into the muck once and for all. I hope the world learns of all the kidnappings and sees behind the false image this tyranny wants to give to the Pope and the foreign press.

Down with the Castros! Down with Communism!