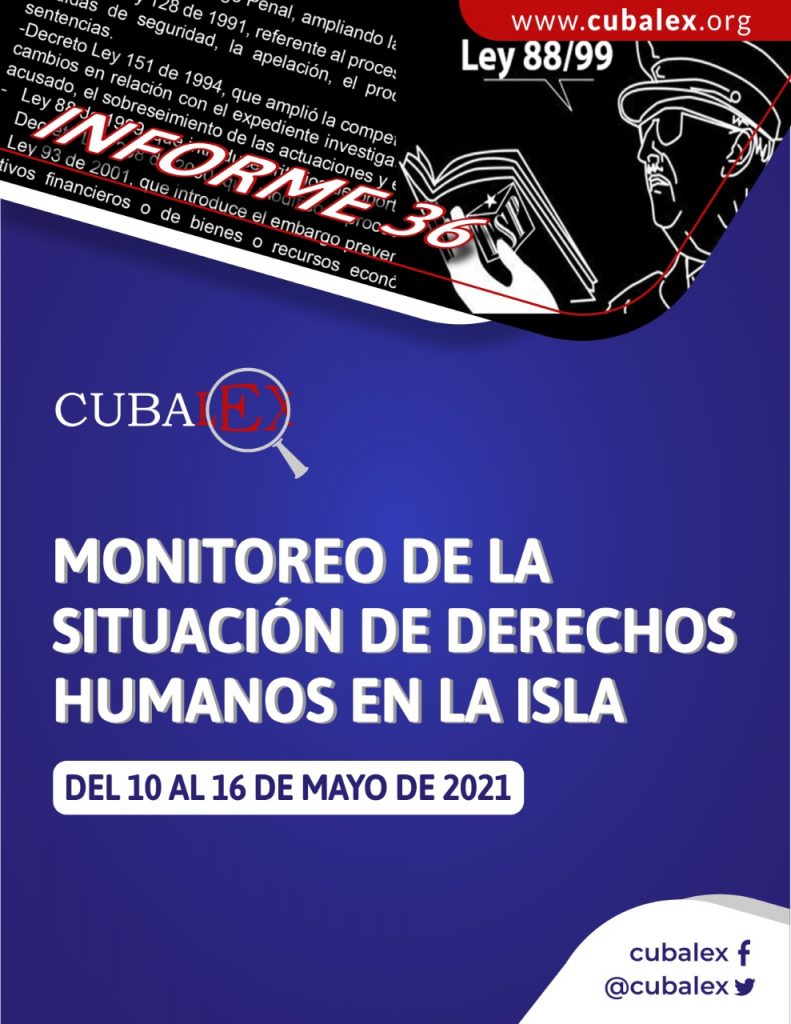 Cubalex, 20 May 2021 — Cubalex monitored acts of harassment against civil society from May 10 to 16, 2021, as well as related news associated with government measures taken during the pandemic, and instances of shortages of products and basic goods. This report also analyzes the selective internet outages that activists and dissidents have suffered, and highlights accounts from the official press of threats, attacks, and violations of rights.

There has been a deterioration in basic living conditions of the population. Electric power outages have begun to be reported, the range of products sold in MLC (hard-currency) stores has increased, and the frequency of transport between Havana and the provinces has decreased. At the same time, the reported cases of Covid-19 and the difficulties in acquiring food continue to increase.

In one week, our organization documented 35 incidents of repression, including acts of repudiation, home confinement, and arrests; which affected 53 people, 16 of them women.

One of them was the activist Yeilis Cruz who is detained at the 100th and Aldabó station, accused of an attack, after filming the television presenter Humberto López on the street. López himself, director of the program “Hacemos Cuba” (We Make Cuba), presented on this program a series of laws, including Law 88, under which 75 journalists were imprisoned in the 2003 Black Spring. A  lawyer on his show once again threatened maximum penalties for those who disagree with the government. In addition, the guest spoke of the possibility of trying in absentia or extraditing Cubans who are outside the country who finance, cooperate with or coordinate activities that the country considers to be crimes.

Of the events monitored by Cubalex, 63.3% occurred in Havana, and one part related to the state of isolation in which they are keeping Luis Manuel Otero. Several activists who tried to get to the hospital to inquire about him were arrested, including Adrián Curuneaux, a member of the Opposition Movement for a New Republic (MONR), who is still imprisoned for this reason.

You can read all the details in our weekly report.