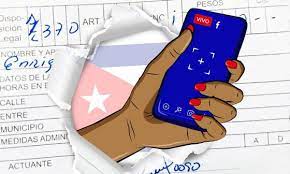 Cubalex, 19 May 2021 — The Office of the Special Rapporteur for Freedom of Expression [of the  Inter-American Commission on Human Rights (IACHR)] documented a continuation during 2020 of the pattern of restrictions on freedom of expression and access to public information in Cuba.

The annual report issued by the organization indicates that acts of threats, harassment, and persecution had been observed against journalists, dissidents, activists, artists, and teachers who question the regime, or who disseminate information or opinions on issues of public interest. Although these forms of harassment are not new, the IACHR  and its Rapporteurship also observed that they have increased during 2020 in the midst of the pandemic.

The provisions of Decree-Law 370 “on the computerization of society in Cuba,” protect a large part of the persecutions against expressions of criticism. This rule criminalizes social media posts and affected dozens of Cuban citizens during the year.

The rapporteur noted that, in addition to the fines limiting freedom of expression in networks, harassment against independent journalists includes intimidation against their families, and confiscation of their work resources.

For example, on January 8, agents of the National Revolutionary Police and the Cuban Intelligence Directorate raided the home of CiberCuba reporter Iliana Hernández, in the town of Cojímar, east of Havana. According to the information available, the officers took several of her personal belongings, including her personal computer and her cell phone.

In the second half of the year, the report highlights the release of journalist Roberto Quiñones, a few days after serving a year of imprisonment. The independent journalist complained that in prison he was denied “all the benefits” he was entitled to, in addition to denouncing the overcrowded conditions, poor quality of water and food, and the lack of medical attention. The Cubanet reporter was sentenced on August 7, 2019 by the Guantánamo municipal court to one year in prison for the crimes of resistance to authority and disobedience. The authorities arrested him when he tried to report on a trial in his home province.

It should be added that the Office of the Special Rapporteur learned of complaints of the blocking of certain applications and websites, as well as interference and alteration of mobile-phone data by the government. Many of these events took place in the setting of an agitated social climate and calls for protests, thereby preventing communication and coordination of citizens. The internet cuts were also selective, mostly targeting activists and journalists.

Thus, for example, on November 29 an “intermittent blockade” of social networks and internet services was reported, which would be linked to the events that occurred of the previous days, among which were the eviction and arrests of activists, who remained locked up and on strike as a protest, at the San Isidro Movement headquarters and the artists’ demonstration of in front of the Ministry of Culture.

In the report that you can download at this link, the IACHR and its rapporteur break down the acts contrary to freedom of expression that affected Cuban citizens during 2020.