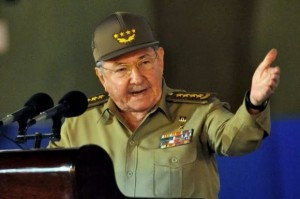 In Carlos Manuel de Cespedes Plaza, in Santiago, decorated with giant photos of Fidel age 33, and a young Raul, age 28, the 82-year-old Raul Castro, often tongue tied and clearly grumpy, let out a cry of alarm against the powerful forces “inside and outside” the Island who are trying to undermine the Communist system among young people.

Raul was presented not as the head of the government, but as commander of the Second Front, which fought against the troops of Fulgencio Batista.

In his desperate harangue from the same balcony in Santiago de Cuba from which his brother Fidel proclaimed the Revolution 55 years ago on New Year’s Day, the old former guerrilla warned: “The challenge is greater now.”

On an island where the government tries to control what you read, watch on TV or hear on the radio, the avalanche of digital information distributed from house to house constitutes the most serious threat to the totalitarian regime. 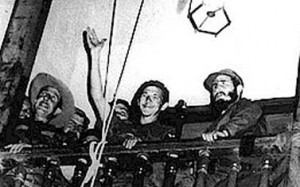 In olive-green, with his commander’s epaulet and its four stars, Cuba’s foreman stressed, “There is an ongoing campaign of subversion” directed at the young. “We see attempts to subtly introduce neoliberal and capitalist ways of thinking, to dismantle socialism in Cuba from within.”

Raul said, “Let there be no mistake, the new ideas are driven by powerful forces inside and outside” of Cuba, and have created “a pessimism with respect to the future.”

Fidel Castro, now 87, has not attended the New Year celebrations since he officially ceded power after undergoing emergency surgery in 2006, and formally handed it over in 2008.

Before three thousand guests, the speakers preceding Raúl focused on praising the gains of the healthcare and educational systems of the island in the 55 years since the Revolution brought down Batista.

The younger Castro recalled that the U.S. attacks against the Cuban government left more than 3,000 dead, and thanked the former Soviet Union for its strong support.

In his speech of about 20 minutes, Raúl received only five rounds of applause, including one when he mentioned his brother Fidel.