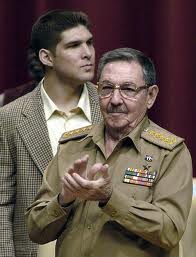 I do not mean to criticize children for being children, nor grandchildren for being grandchildren, I will just talk about a sector that just because we haven’t heard of them, that doesn’t mean they are not full of it. Today I’m answering questions about Raul Guillermo Rodriguez Castro, the son of Deborah Castro Espin and Luis Alberto Rodrigues Lopez Callejas.

The marriage of Vilma and Raul was the most iconographic of the Cuban Revolution. He personified the hero, and she her heroic role of compañera, volunteer, submissive and party functionary. Four lovely children were born from the Castro-Espin union, children who in time became spoiled. The first of the grandchildren, the little Rodriguez Castro, was a solitary baby, naughty, lively and stubborn, already demonstrating in his behavior an authoritarian tendency.

Having been born male, with a skilled calculating father, and a sixth finger inherited through his mother, he awoke in grandfather Raul what we might describe as a mixture of love, joy and compassion. Raulito became the favorite. And on more than a few occasions the jubilant El General presented him with a phrase that provoked mockery rather than admiration. “My grandson is a marble beauty, a colossus with a baby face.” The general’s creativity, although it had improved somewhat, continued to be invaded by grandiose and epic concepts.

Surely hoping to construct a paragon of virtues, the family made this little angel a useless mess. So when he was enrolled in “Gustavo and Joaquin Ferrer” primary school, he walked alone accompanied by an inseparable flattery and an unbearable escort that cast a disagreeable spell over boys his age.

Surrounded, or perhaps well-attended by, his scandalous loneliness, he arrived at “Josue Pais” junior high. By then he was already a youngster who liked to annoy people and disliked everyone. Allergic to the entire spectrum of respect, he felt the holy grail of control and enjoyed a certain morbid knowledge that he featured in others’ nightmares.

The eccentricity of the age, plus the constant vision of his family environment, pushed him to drink, smoke, and to choose paths that others older than he called “missteps.” He adopted a vehemently racist attitude that at times managed to embarrass his most loyal friends, family and benefactors.

Out of respect I will not mention the name of the girl who was expelled from the classroom for being black, or rather, because The General’s Grandson announced his decree that he would not share the same space with this classmate because — according to him — blacks are not only ugly and gross, they stink.

By that time, the words “thank you” had been eradicated from his vocabulary. Quite understandably, Cuba suffers a feudal system generous with a dictatorial and anarchy ruling elite; no one has to be grateful for what they believe is rightfully theirs. Nobody learns to say thank you if they are not truly appreciative.

Ungrateful, unmanageable, and at the precise moment when economics is the latest hot topic, Raulito, now the presidential escort, decides to study at the Faculty of Economics at the University of Havana. It is common, and even reasonable, that high performance athletes study for degrees in Sports making international competitions their state exams.

Using this same principle, and after some convincing that included pressure, the rector of the university was left with no options but to understand that the student in question, tall, blond, with a strong build and uncouth manners, should be awarded a degree with honors due to his participation as a special guest at government events. His repeated absences from class were not taken as a sign of intellectual impairment, but as support to the national patrimony.

The winds of change blew, the world map transmuted its colors and this family, by order of their patriarch, needed to be more united. In an act of humility and sacrifice, Uncle Alejandro Castro, known as the Colonel with less body fat than grey matter, paired up with an ex-girlfriend of his nephew Raulito, and so hoisted the flag of the strange family passion for common property.

So, on Sundays, the clan enjoys the exotic delicacies still prepared by old Chute (the cook Jesus); and the rest of the week nephew and uncle review the proper code of conduct for sharing the same woman. It may seem immoral, but it’s nothing new; it is known that Vladimir Ilyich Lenin and his wifeNadezhda Konstantinovna Krupskaya, went with, lived with, and were entertained by Elizabeth D’Herenville (Inessa). Sure, there are differences, the leader of the Bolsheviks, his partner, and their mutual concubine, were not united by consanguinity.

The boss of the State Security Staff of the Ministry of the Interior, and some others under his command, feeling threatened by the real possibility of being cruelly supplanted by a healthy and powerful chip off the old family block, try with incredible care to ridicule him, subtly launching a few phrases into the mouths of public opinion: “Bodyguard 2,” “no one knows if the grandson takes care of the granddad or if the granddad takes care of the grandson,” “I have to look after one and watch the other”… in short, the boy is criticized, but untouchable.

Raulito married, and at the wedding was heard the contagious strains of La Charanga Habanera, an orchestra that, among others, decided to exchange talent for the caresses of power. Later he divorced, leaving a daughter on the way, and making plans for another wedding.

The Castro Espin lineage is like a charitable organization committed to pettiness where common sense is the least common of the senses. Raulito is a victim who didn’t manage to be different. Today he calls himself a patriot and a defender of those ideas that perhaps nobly inspired looting and revolution.

He recreates a sickly ardor to impress the people beneath his social status. He is paranoid, and has only read some of the alternative pages of the life of Julius Caesar; he is really convinced that the end of his grandfather Raul will be reduced to assassination in an act of revenge on the part of his own bodyguard. To say more would be redundant.