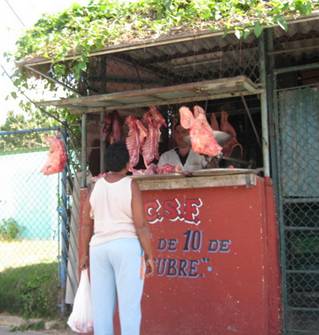 I’m sad to see the streets of the city filled with trash and red earth. The doorways of many of the old mansions and residences in the Vedado neighborhood are converted into improvised stalls which, amid the grime and decay, display all kinds of merchandise from radio batteries to clothes and the worst taste and equal quality.

Beach umbrellas, nestled in the midst of what was once a driveway, with a makeshift and wobbly table, indicate places where food is sold. You see pedestrians passing by with a decorated cake in their hands, without any kind of protective covering. Others carry, as if it were a briefcase, pigs’ heads grabbed by an ear, or a mattress in a makeshift wheelbarrow dragging on the pavement.

You can see the same images in a country town and in the Havana neighborhoods, Vedado or Neuvo Vedado. The entire city, as our writer Leonardo Padura says, has been ruralized.

But the most painful of all this is to observe the numbers of young people, still school-aged or who should be learning a skilled trade, pushing wheelbarrows uphill loaded with produce. Today I saw with a certain sadness a young man, good-natured, with a face that reflected intelligence and pain,busily pushing his cart up 25th Street, loaded with fresh, clean and well-organized products, having to stop every three or four steps to gather his strength.

That young man probably did not continue studying on perceiving that, in this other way, he could earn more than a badly paid professional. I felt sorry for him and his parents. It is a very unfortunate state of affairs, but the majority of people who have chosen self-employment are the young whose talents are being lost and the country, in the future, will not be able to count on them.

If they weren’t young they wouldn’t have the physical strength to push these heavy carts, which recall those of the colonial era, when the country had not yet been developed and the Cuban nation was being born.

Of what value are those massive calls to study in the universities, after 1959, if the conditions for reversing the fruits of this education in factories, industries, etc. were not created for the development and benefit of the nation. This unfortunately form of commerce in the colonial style is what has proliferated in our battered country, taking us backwards in development.