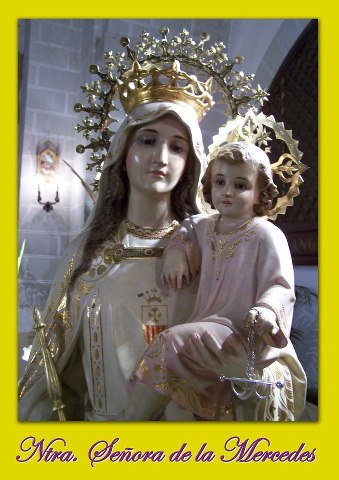 For the frequent intercession attributed to her by prisons and the prison world, Our Lady of Mercy or The Most Blessed Virgin of mercy, is proclaimed Patron of the Captives, her feast is celebrated September 24, her image dressed in white, with a scapular with a shield embroidered in red, with a cross at the center and topped by a royal crown, in whose hands the image shows broken chains and handcuffs, as a sign of broken bonds, applicable to life in sin, some images may show Jesus or not, and her carrying a child also wearing the scapular, the Church celebrates her feast and as a Major Feast Day, dressed in white.

Mariana is a dedicated, popularized by San Pedro Nolasco, a pious Spaniard who devoted his vast fortune inherited from his parents when he was orphaned at age 20, and decided to serve Jesus Christ in a ministry dedicated to rescuing captive Christians who were arrested by the Muslims. He was able to do his work by pretending to be a merchant in Valencia. In 1203 he declared that he had received a prescient vision of his mission, and he joined with St. Raymond of Peñaford, in an association that ultimately gave rise to “Los Mercedarios,” the Order of Mercy.

In the early hours of August 1st to 2nd in 1218, he declared his second vision this time of the Blessed Virgin Mary, in which the Virgin asked him to found a religious order dedicated to the liberation of the prisoners which he called “The Order of the Blessed Virgin Mary of Mercy of the Redemption of Captives,” — “Order of Mercy” or the “Mercedarios” is the name by which its members are known.

This order of a military character, and later mendicant, because among them its members supported the prisoners by asking for alms in the streets. It’s headquarters was established in the Santa Eulalia Hospital of Barcelona on August 10, 1218, with approval and support of James I, King of the Crown of Aragon (the Conqueror). In 1235 the Order came to be governed by the Rule of St. Augustine and Pedro Nolasco served as its first superior until his death on 14 May 1249 in the city of Barcelona.

For his pious life and work he was canonized by His Holiness Pope Urban VIII, who declared the feast of St. Peter Nolasco to be celebrated on January 28.

Prayer to the most Most Holy Virgin Mary, Our Lady of Mercy

Virgin of Mercy, Mother of Christ and Mother of the Church, refuge of the sinful!

To you I draw close, filled with love and confidence, knowing that you always listen to your children, for you are the Mother of Mercy.

I ask of you, dearest Mother, that my faith, hope and charity may grow and strengthen. That I may always live as a true child of God, your son, Madre mía.

I dedicate to you this day all that I have and all that I am: my life, my work, my happiness and my suffering. I want to be completely yours. I want to follow your footsteps along the path that leads me to Christ, our Redeemer and Liberator.

Do not forsake me, Heavenly Mother. Grant what I ask of you from my heart, for me and for all those who suffer imprisonment for their causes. I pledge my everlasting gratitude for your favors and to love you more each day.

Lady of Mercy, pray for me and for all prisoners, and grant them the grace to be freed from the chains of earth and from sin through love for your Son, Jesus Christ, who lives and reigns forever and ever.