An Interview with the director of Memories of Overdevelopment

In the same way that good collectors poke around in tiny stores with an expert eye, lovers of the art of the cinema chase down Miguel Coyula. With numerous awards for a rigorous and always growing work, Miguel dazzles us now with Memories of Overdevelopment. To conduct a formal interview, I have searched in the extensive bibliography Miguel’s work has already accumulated, with reference to the prizes he has received. But I do not put myself on the plane of the specialists, and here the protagonist is a cousin, who in his 33 years exhibits a solid career. And the best is yet to come. Being related is pure coincidence.

Regina Coyula: As a child you had a great predisposition to literature. Do you think you’ve reconciled this obsession with the development of your scripts, or do you see it as two independent expressions?

Miguel Coyula: Yes, I think that literature was for lack of anything else, I think if I had had a camera from the beginning perhaps I would have turned to that directly. But I do think that any literary work is adaptable in one way or another to the cinema. If you know the tools of the cinematographic language well and are willing to experiment with them, any adaptation is possible. That is, I have always seen all artistic expression through the view of cinema. And I like writing very much, in fact if I suddenly went blind and couldn’t film any more, I’m sure I would write again.

RC: You started making films informally in early adolescence. Did you already know then that this is what you wanted to do?

MC: It was after my first short film Pyramid (1996) that I knew I couldn’t do anything that would give me more pleasure. From that moment I had no doubts. It was my only chance to build a different universe, entirely as I pleased.

RC: What project do you consider your “coming of age”?

MC: That’s a difficult question. For example, before going to the Film School I made two shorts, Pyramid and Light Valve, which despite their imperfections I consider much better than everything I did in school. When I made them I was in a state of pure intuition. In school, no matter how much you resist it, you involuntarily tend to structure everything, and the films it interests me to make could be described as a subconscious vomiting. 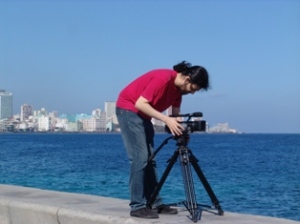 Fortunately, after leaving school I recovered quickly and perhaps that’s why I make movies outside of any institution. My first feature film, Red Cockroaches, is — at the performance level — the first movie where I managed the desired atmosphere, controlling the tools of the language to achieve it. My visual language is undoubtedly already formed there, however the structure of the story is too linear for my taste. It is in Memories of Overdevelopment where I now have a language much more akin to the way I think, in fact the language of the movie is like putting yourself in the character’s head, where every kind of idea, memories, fiction, dreams, documentary, animation all come together, all linked with a montage of associations.

RC: The International School of Cinema of San Antonio de los Baños: what is the positive and negative balance that school left in you?

MC: I learned to use a lot of equipment that I otherwise could not have accessed. And I learned, above all, that I’m not particularly interested in working as a team, that I have no other option than to do the filming and editing of my movies to be able to control every detail to the maximum extent, that I don’t ever want to shoot in 35mm, and that I never want to study in another institution. Of course I’m speaking only for myself and for those who think like me. However, I think that for a great share of the students EICTV is very useful.

RC: Director, screenwriter, director of photography, editor, music director … Are you compelled by the budget or is it a decision to maintain control over the production?

MC: Both, or perhaps if I had money I would have more assistants, but the photography, editing, sound design, I could never give those away. Of course you can’t have assistants if you can’t pay them, maybe that’s a good thing… maybe if I had more money I would be a complete dictator with my team, because when everything’s said and done I’m Cuban and we know how that works. It’s a lucky thing I didn’t go into politics.

RC: What collaboration have you received from ICAIC (Cuban Institute of Cinematographic Arts and Industry) in your career?

MC: Apart from showing my films in their Young Filmmakers Exhibition, I’ve never worked at ICAIC, nor have they ever financed any of my movies.

RC: Memories of Overdevelopment: Don’t you fear being left in the limbo of having made a very “foreign” film for the Cuban public, and a very Cuban film for foreigners?

MC: It’s very true, this, but inevitable. There are filmmakers who make movies to make money and others who do it to show their films at the festivals. I do it because I have no choice, I have to get out what’s inside me. Before “Memories”… all my movies could have been set in any part of the world, they weren’t tied to a reality or a political or social context. With “Memories”… I had the opportunity and the need to talk a little bit about my origins, because it’s the only movie where I was probably going to have the chance to do so.

In fact the movie may be Cuban for a foreign audience, but it’s not the Cuba of the Tropicana, mojitos, jokes, the beach and Cohibas that they want to see. It’s not entertainment. It’s a serious analysis of the effects of a political regime on an individual in the last 50 years, and a lot of people aren’t interested in that. It’s a politically incorrect movie for anyone, regardless of their political position, against all flags, against politics (of the left and the right), religion and consumerism. And people have very little tolerance for this kind of film today.

RC: Memories of Underdevelopment: What are the opportunities to participate in Festivals and to get it in the distribution chain?

MC: There are some festivals, I am going to be traveling a lot this year. There is still no distribution, but I don’t have great expectations. From the beginning I knew it wasn’t an easy film, and we’ll see how that evolves.

RC: What would be the movie you’d like to do?

MC: A film without borders, I’m interested in stories about individuals who don’t fit into society, but with universal conflicts. Mystery interests me greatly, to me it’s essential that a movie have “loose ends,” because as a creator I need to have doubts about the universe I’m creating; if not, I lose interest, and the cinema that interests me to make is the cinema that will continue even after the movie is over. I believe that to be a truly independent filmmaker is a responsibility to make something distinct without any interference from anyone.

RC: Would you accept working on a commercial project?

MC: I would accept work on a project where I had a green light to change everything at will. Which is practically impossible within a traditional structure.

RC: What is your next project?

MC: Blue Heart, a movie on the subject of cloning, and the second part of the trilogy that begins with Red Cockroaches. With it I return back to the subject of taboos, of science fiction, to build an alternative reality.