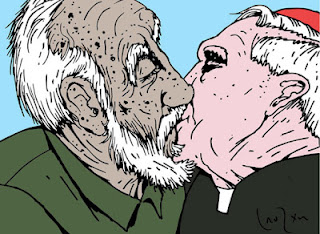 They often made and received calls using their cell phones

Finally the miracle had happened. The prose of war of decades and decades of totalitarianism media emerges now from the mouth of the Catholic Church, formerly irreconcilable enemy of Godless societies.

The press release from Orlando Marquez, director of the Archdiocese of Havana’s magazine Palabra Nueva — New Word — requested by Granma, the official organ of the Cuban Communist Party, is the suicide of an illusion.

Without making it to the first page, but with the consent of Cardinal Jaime Ortega and the imprimatur of General Raul Castro Ruz, the Cuban chapter of the “Reconciliation” just became obsolete (even while still in the making).

Author of a thousand and one democraticforms columns, Orlando Márquez, not without humiliating dignity, has paid the price of informing us that their will be no such thing. At least not among men and women now living. Resentment rather than reconciliation: in this, too, were they wise, our warlords as a fount of olive-green governance.

It’s upsetting (and panic inducing), this eccentric ecclesiastic before a domestic question of human rights, in a nation that limps with respect to the constitutional text itself. They marvel (and mutilate) the threats of a police intervention that would devastate the “religious freedom” of Cubans (the just will fall for the sinners: it’s the exemplary dogma of the Revolutionary State). It’s laughable (and rabid) the prudish paranoia of seeing themselves as victims of an anti-papal plot. It’s miserable (and mediocre) this matrimony of an institution of the spirit on the most materialist — militaristic? — altar of the world.

Cuba is a very convenient scaffold. Control is Catholicism. But Orlando Marquez legitimates and, without knowing it, stones his Church. With this coupling of fidelities, the prominence stolen in recent years by the Catholic hierarchy begins to fade. The first words to come from God in our official press are already a capitulation, more artful than atheist. Showing their dictatextual accomplices seams. Religion reduced to group therapy to cover “spiritual and even material needs.” The temple, like the whole street, seems to belong to no one, for that native sin of not being sufficiently pious (although the interventions of State Security are themselves hermeneutically justified as political performance or collateral damage).

Applauding we are overwhelmingly a people. But at the first personal gesture we disappear. Or they disappear us. And then we are no longer strangers in the land of others. Worse still, we are the Other known and unrecognizable: unpardonable pariahs under the crushing demagoguery of power (which always is One and does not admit the Outside).

Hence, perhaps, the barbarity of the ballet of announcement-repression between Catholics and Communists. Hence also the incriminating loathing that in symbiosis launches Granma and Palabra Nueva against some occupants capable of “frequently making and receiving calls using their cell phones.” In some unlikely bit of that future signal the humanist heresy of our freedom could be incubating today.

From post-Communism to post-Catholicism there is only a single text message of difference.