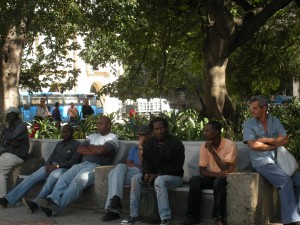 Cuba has become a universe with its own rules, perhaps somewhere in the the historical past, or in an existential limbo difficult to read facing the outraged crowds who curse the politicians, and the financial institutions in dozens of cities in Europe and North America.

In the island universe things continue at the pace of the Middle Ages. But neither the money nor the economy seem important, rather politics or ideology that sustains the only party, the King Star around which countless planets and satellites orbits, whose life depends on its ability to adapt: generals and ministers, deputies and provincial governors, chiefs and local busybody of all kinds, including artists and writers.

In the orbit of Power stars move, sometimes managing to raise their heads and look up. Some transcend space, while many fall from the top, reeling from the change of passwords of the uniformed little gods. In a special limbo are the faceless: agents of State Security. And finally, just finally, in the confines of that universe are those who are not considered part of it, the men and women who disagree and oppose despotic platform. These are in some way, the kamikazes who show their faces and break the rules.

Because the State owns the means of production, communication, education and the cultural centers, if you do not adjust their patterns you confront the monster. Those who wish to prosper would do better to never forget that the limit is somewhat obscured and the staircase leads to the basement. Most go unnoticed by voting for the designated candidate, showing obedience, not protesting, and neither asking anything from the government nor criticizing it.

Nothing of outrage. Under the socialist universe it is not possible to love as a hero, save for those who come from the past and illuminate the future from above. The worst thing is how natural the collective cynicism is, smelling of a whiff of human degradation. The mental wall helps you survive and you turn your face when they kick your neighbor. Personal bravery is marked-down merchandise. Plurality is on other coasts.

This postponed plurality joins itself at some point in the island’s astrological calendar, the legion of defeated rebels and the intellectuals who perceived the light in the corner of the absolutist firmament, most of them beyond the seas.

In the end, only at the end, and without comments from the foreign press, the opponents figure in, the opponent who are shaking the limbo of prudence and challenging the entelechy of a unique and exclusive scene. Some emerge in the foreign media; sometimes they ricochet within. Meanwhile, most see the bulls from the stands and watch on TV the thousands of angry protestors in the far off plazas of Barcelona, Madrid, Rome or New York. The question would be, of course, how long?