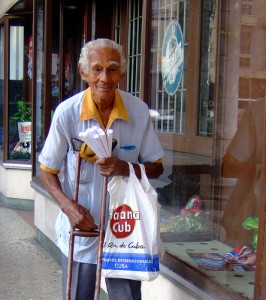 Salty or sweet. Dark or medium roasted. Havana wouldn’t be the same without the peanut sellers. Eating peanuts is a major way to spend more than an hour waiting at one of Havana’s crowded bus stops.

The cucurucho (paper cone) cost one Cuban peso (five cents U.S.) and on any central street, children’s park, and at the exits of hospitals and schools, you can find men and women selling the popular seed.

Almost none pay taxes. René, a state inspector, says that the peanut distributors could be classified as “ambulatory food sellers,” according to the bureaucratic jargon, and so they are included in the authorized self-employment list of activities. “But for the moment we’re not interested in collecting taxes,” he says grimly.

It’s a business with few benefits. “It costs. From a pound of peanuts I make 24 cones and get about 12 Cuban pesos. If you take into account the salt and the sheets of paper I have to buy for the cones, I earn less,” says David, a skinny gentleman who usually sells peanuts on the Havana corner of Acosta and Diez de Octubre streets.

In the farmers markets, a pound (less than half a kilo) of peanuts cost between 8 and 14 Cuban pesos, since the start of the year. There are sellers, like David, who prepare cones full of hot peanuts nicely roasted.

Inocencia, an occasional seller at Fraternity Park, gives cones barely full without salt and burnt. “Grandma, you have the worst peanuts,” the students say. The old woman, unperturbed, answers, “Child, for a peso you can’t expect more.”

Rodolfo, another manisero, said that on a good day he earns between 80 and 100 pesos (3 or 4 dollars). “On average, twelve hours I’m walking from one place to another selling peanuts. This is a business of pennies. And poor people. At times the police harass us. But lately, they don’t bother us. ”

At a time when the private work has expanded, the peanut vendors do not appear explicitly among the 178 offices authorized to work for themselves. Maybe the state recognizes that these people, mostly elderly, live below the poverty line and earn lower profits. Just enough to survive.

“Either way, I don’t trust them. Even the fortuneteller, pet groomers and public toilet attendants are paying taxes. No doubt they’ll decide to include us,” said Suraima, a mother of five children selling peanuts at the P-10 bus stop.

Peanuts have always been a popular food on the island. In times gone by the sellers offered them in cans with burning coals in the bottom, to keep them hot. Now they no longer proclaim, “Peanuts, the peanut seller is leaving…”

The peanut sellers formed part of the Havana landscape. So much so that the prominent musician Moises Simons (Havana 1889-Madrid 1945) in 1928 composed El Manisero, one of the most famous Cuban songs of all time, with more than 160 versions. Among them, those of Trio Matamoros, Rita Montaner, Bola de Nieve and Antonio Machin.

Eating peanuts while waiting for the bus and talking about baseball or watching a soap opera, or on the Malecon or at the movies, has become a Capital routine. After eating them, people throw the cones on the public street. A bad custom. Though the trash can is in sight.

Note: This article was written two weeks ago, when Ivan didn’t imagine that the ex-president Jimmy Carter wold visit Havana and much less that he would meet with dissidents, those who gave him a gift of peanuts. In my blog (http://taniaquintero.blogspot.com) you can find an investigation from two years ago about the Cuban composer Moisés Simons, author or El Manisero (Tania Quintero [Ivan’s mother who manages his blog from her exile in Switzerland]).