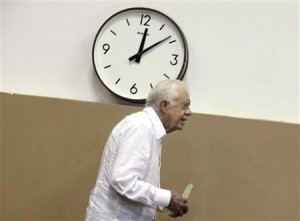 In real politics what the media reports is important. But even more crucial still is what is not said. Jimmy Carter’s three days in Havana seems to suggest that Barack Obama’s administration asked the ex-president of the United States serve as a mediator with the riffraff for the Jewish contractor Alan Gross, sentenced to 15 years in prison for trying to set up computer systems and parallel communications not authorized by the Cuban regime.

In fact, in addition to his meetings with leaders and officials, the Catholic Church and the Jewish community and a group of dissidents Carter was allowed to visit and talk to the beleaguered Gross, 61.

In the political world, Carter is a well-known old man. Carter is an old world politics. Has intervened in a number of global conflicts and monitored various plebiscites in nations barely beginning to follow democratic rules. In 2002 he was awarded the Nobel Peace Prize.

It is true that during his tenure (1977-1981), at the height of the Cold War period, he suffered the setback of the hostage crisis in Iran, which cost him his re-election, and that Fidel Castro, despite concessions from the U.S. president to relax the economic embargo and to establish, in Havana and Washington, “interest offices” — in lieu of embassies — which paved the way for short-term dialogue between the two nations, Fidel did not know or did not want to know, how to grasp the opportunities offered by Carter.

Of course, at that time, the one and only comandante felt strong. It was the time when the former USSR injected the local economy with billions of rubles and endowed the Cuban military with the latest in conventional weapons. Castro cavalierly ignored the offer of Jimmy Carter. And he carried on with his war plans in Africa. Fidel Castro is one of those to blame for the fact that the unjust embargo remains in place .

Nobody denies the ethics and honesty of the bombproof Carter. Nor his desires for a better world. One might think that is naive. At some stage he was called ‘Carter the fool’, for putting his wishes of peaceful coexistence to real politics. But in any event, he is someone who deserves respect. On his second visit to Havana, he learned to please everyone. It is not easy.

He agreed with the Cuban government on the issue of the release of five men jailed in the U.S. and ending the embargo. But he maintained his democratic principles, calling for respect for freedom of expression and association.

He met with figures of the two political camps. As in his first visit in May 2002, Carter could not be manipulated by autocrats who govern the destiny of Cuba. What he said is what he thinks. Public statements aside, Carter had a mission. Negotiate the release or possible exchange of Alan Gross.

Outside this topic, little more can be achieved. And Carter knows it. It would be very pretentious to think that the ex-president of the United States can drive serious and thoughtful dialogue between the opposition and the government.

Although he is already 86 years old, he could try. Either way, it went well with all parties. Castro listened to the music they love. Freedom for their imprisoned spies and once and for all an end to the ancient embargo, and letting 5 million gringo tourists come to spend their dollars on the island of olive green.

Nor did Carter’s guests from the opposition feel themselves to be nobodies. They expressed their views in brief exchanges with the former president. And Carter mentioned on state television the right to freedom of speech and association of those who think differently.

As in 2002, the visit of ex-leader had little influence on the future economic and political changes that Cuba is crying out for. It is striking how the Castro government can discuss any topic with people from the United States while it covers its ears and furiously suppresses internal dissent.

One point the democrats on the island make is valid. I suspect that even the day that the U.S. repeal the embargo and normalize relations, the government will always have on hand a good excuse to stop the changes.

Leaving the Castro brothers with no arguments is a difficult task. We, the local opposition, have to roll up our sleeves and demand a face to face dialogue with the regime. The problems of Cuba are an issue that concerns everyone. And only we can make it happen. People like Carter are not going to solve it. It hasn’t come to that.