Speaking at the Atlantic Forum, Yoani Sánchez tells Mario Vargas Llosa that help is needed to move the center of the discussion to the island. 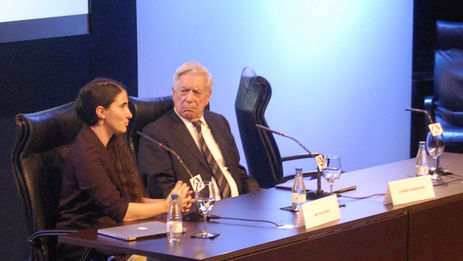 14ymedio, Madrid, 8 July 2014 — “Cuba’s problem is within Cuba. The locus of the discussion needs to be moved to the island.” This was the powerful message from Yoani Sanchez, 14ymedio director, to Nobel prize winning writer Mario Vargas Llosa at the VII Atlantic Forum, at the Casa de América in Madrid, Spain. Vargas Llosa had asked Sánchez how the Cuban opposition could be aided from the outside, whether there might be some common themes to emphasize, such as the embargo. “The embargo, tourism…all of that is just transferring the problem outside. To the White House, to the airports…” said the journalist and blogger, stressing that the way to push for a transition in Cuba from outside the island is not to turn attention elsewhere.

This exchange took place during the event organized by the International Foundation for Liberty, whose theme this year is the economic and institutional consolidation of Ibero-America. Vargas Llosa, foundation president, started off the proceedings by asking Yoani Sánchez about the actual scope of the so-called “Raulist” [for Raúl Castro] reforms on the island. The journalist qualified them as “small transformations caused by necessity and not by political will”, meaning that they do not correspond to the real changes that the country needs.

However, there are differences between Raúl and his brother, Fidel Castro. “The repression hasn’t ceased,” Sánchez said. “It’s just that the current version of it is more continuous, it’s in every minute, it leaves no evidence so the victims can defend themselves. Fidel was more media-savvy.”

Vargas Llosa also inquired about the birth of 14ymedio, remarking that, because of the many barriers it might face in Cuba, he never thought it would actually be created and maintained. “It’s a digital project because the printing houses in Cuba are under more surveillance than the barracks,” Sánchez explained, leading to a discussion of 14ymedio’s objectives. “Who is our readership? I think of people like my mother who, when I speak to her of injustice and human rights I don’t get her attention, but when I point out that this year she’ll have to double her spending to just maintain her current level of purchasing power, she is interested and exclaims, ‘this needs to change’.”

Sánchez spoke of the diversity of opposition movements on the island, although she emphasized that their principal limitation continues to be the state’s communication media monopoly. “In Cuba there is a great underground market for information,” she said, adding that technology is key to overcoming this barrier.

Carlos Alberto Montaner pointed out that “the idiot is now also part of political life in Spain” and that the stability of Spain’s democracy is endangered by the presence of radical groups. “If that strange popular front were to become institutionalized and politically powerful, the country would head towards economic folly and alienate investors”, he added.

Nine Cuban activists travelled from the island to attend the Forum. However, Venezuelan opposition member María Corina Machado was unable to attend, having been barred from travelling outside the country because of her alleged implication in a plot to destabilize the government of Nicolás Maduro.