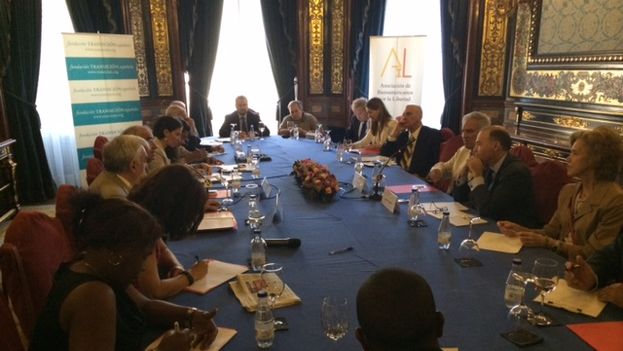 Yoani Sánchez, Madrid, 9 July 2014 – Right now I am taking part, along with several Cuban activists, in a seminar on the Spanish transition being held in Madrid. Organized by the Association of Ibero-Americans for Freedom and the Spanish Transition Foundation at the Casa de America, the event includes the participation of nine activists from within the Island from many different sectors, such as law, citizenship, human rights and journalism. An opportunity for us to meet with each other without the police cordons or acts of repudiation.

While I listened to several speakers, I remembered when, in 2011, I watched the series The Transition, with the voice of Victoria Prego. Coincidentally, the morning I started to watch the excellent scenes of that documentary and the analysis that accompanied it, a friend from Madrid visited me. She looked at the TV screen and said to me, “I experienced many of those events, but at that time I didn’t know we were in transition.” Her phrase has stayed with me as solace and hope all these years. Today, in the Casa de America, I remembered it.

Are we Cubans living in the transition? Just asking this question is enough to annoy some people and excite others. A transition – the experts and analysts tell me – needs more political, social and economic evidence. A word of such magnitude requires real substance, not just desires, others warn me, also with very good arguments. If it turns out that an irreversible and defining change has occurred within Cubans, could we see that as the transition? In this case, the micro look beats out the macro analysis.