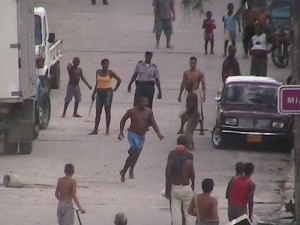 You can cut the social tension with a knife. You can see it at a glance. Let me tell you. On a bus on the P-3 line, full of passengers, a skinny black man blew up, furious, and got into a heated brawl with a student. Just because he had been stepped on.

In addition to kicks and punches, each swing of the man’s huge machete, totally out of control, caused a fearful roar of the nearly 200 people who crammed the bus. People escaped through the windows to avoid being hurt.

A little later, two drivers of state vehicles came to blows in the street. The trigger was that one of them had abruptly made a dangerous turn and almost caused a collision. Those who were in the cars also took part in the street fight.

On the same night, a few guys, drunk to the gills, started a ‘war’ with stones, cold steel, and loud cursing, for no apparent reason, in a quiet neighborhood in the Diez de Octubre municipality. The residents, terrified, watched the brawl from their windows.

Too much violence for one day. As usual, the police arrived late. As if that were not enough violent incidents in various parts of Havana, reports came of others in different locations on the island. Some ended up in acts of protests against the regime. The most notorious example was in the city of Santa Clara. The spark that started the scuffle was not showing the awaited Barcelona-Real Madrid soccer match in a theater.

In Bayamo, famous because in 1868 many villagers set fire to their houses and properties before giving them up to the Spanish army, a group of drivers created a ruckus over what they considered unfair taxation.

A freelance journalist told me that in October, in the Havana municipality of Arroyo Naranjo alone, the number of cases of excessive violence was about 100, among family members, and in the worst kind of bars, nightclubs and slums.

A sociologist who was consulted explains that increases in social tension and discontent which have recently occurred on the island are caused by unemployment, lack of any future, and high taxes on self-employment. Previously, the government used to open the door to emigration to the U.S. when the social situation became ugly.

In 1963, 1980 and 1994 hundreds of thousands of Cubans fled to Florida to escape a hopeless life. But now the Castros know that they can not open the valve of the pressure cooker that is Cuba, triggering a massive wave of migration.

Senior Pentagon officials have said publicly they would consider this to be an act of war. Therefore, the way to drain the high tensions of the beleaguered Cubans could be serious and profound political and economic reforms.

Meanwhile the sensible locals search for effective answers to the outbreaks of violence, the ordinary people who, for whatever reason, get into brawls.

This is a serious matter. A time bomb with incalculable consequences. Believe me, what’s to come is not exactly good news for the Castro brothers.