14ymedio, 20 June 2015 — The second edition of the event Roads for a Democratic Cuba is taking place in Mexico from 18 to 23 June 2015 under the auspices of the Konrad Adenauer Foundation and the Christian Democrat Organization of America (ODCA). Participating in this meeting are dozens of political activists and civil society leaders of the Island and the Diaspora. The event will continue through the weekend and until next Tuesday.

Among the topics discussed on the first day is the impact on the Island of everything related to the talks between the governments of Cuba and the United States for the purpose of restoring diplomatic relations. Other areas to be discussed are the options of the opposition, various proposals before a new Cuban Electoral Law and ways to strengthen Cuban civil society. END_OF_DOCUMENT_TOKEN_TO_BE_REPLACED

The first meeting of the event was held last December 2014 in the Mexican capital. At that meeting they talked about the diversity of peaceful means to fight for democracy, the role of exile and the importance of identifying the minimum points of consensus to move forward, if not in the desired unity, at least in arranging purposes. 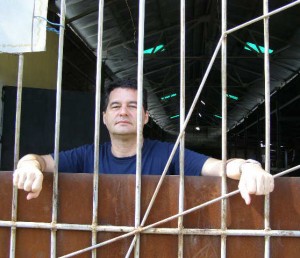 Havana, Cuba, October, www.cubanet.org — Without any doubt, the prosecutor at the oral hearing clung to the least of the supposed crimes, “Housebreaking and Injuries,” being proved by the very “witness” who lied.  The farce of a trial was a settling of scores for Santiesteban because of his opposition to totalitarianism, and so he was made to know by the political police officer, named Camilo, a month before he learned the sentence of the Tribunal of Room 1ra. of the State Security, in his special headquarters in Carmen and Juan Delgado: Five years in jail.

How do you describe your transition from famous person of Culture to dissident?

I have always expressed the desire to count on a little corner of the least important newspaper, on the last page, to communicate my views there, wrong or not, as any mortal.  On a trip to the Dominican Republic, the last I could take abroad, the writer and brother Camilo Venegas showed me something that he called a blog, unknown to me, and that affected me. I returned to Cuba with a fire inside, a flame that grew to upset my view of what surrounded me and worried my contemporaries. Trying to be a voice. From that moment, they began to create my dissident and then criminal file.

They applied the most extreme accusations to me, like running over a child in the street with my car and fleeing, attempted murder, armed robbery, wife beater, even rape, and other stupidities that would make you laughter if they had to do with a fictional comedy and not the real life of a man, and by which I am now a captive.

Who did they use against you?

An ex-wife from whom I was separated for more than two and a half years.  She was angry about multiple situations about which I do not scoff.  I have never said this because it embarrasses me.  And I did not expose it at the trial because it intruded on minors.  Today they are adolescents.  My ex knew about my daughter, 32 days younger than our son. Add to that that I never agreed to marry her.  Later I began a relationship with a talented, beautiful, popular actress, which increased her rancor.

My ex spoke horrors to our son of my new partner, even without there having been a simple dialogue between them, and she still hates her. It happened also that at that time my ex was having a relationship with Mayor Pablo, chief of the chiefs of Playa Municipality Sectors, and that’s where they brought him in. I do not know who manipulated whom, or if both parties did it, but they had grudges against me, that is to say, my ex and State Security.

I do know that they employed the instructor, Captain Amauri, who falsified and hid proof in the preparation of my file. I accused him before his superiors in a letter, calling him an illiterate liar. He was expelled from the PNR (police) for bribery, and although he worked my file, they decided not to present it at my trial.  Maybe one day he will tell the truth about what happened.  I trust that time will bring the truth to light, even if making excuses that he was following orders.

How deeply do you feel the damage that they have done to you?

My journey towards opponent has taken me away from literary media, and of course, driven away colleagues that I used to consider “friends,” leaving only a few: enough. I like to think that each one of those few true friends for me are worth more than the whole group of cowards that fled. All that cultural marginality that they have fabricated around me gives me immense pride.

I have passed through punishment cells, and if thinking differently brings this punishment, I believe that I am in the proper place for me.  At least now I feel far from all pretense.  Really my crime was writing an open letter to Raul Castro, challenging him to free Antonio Rodiles, and some days before, the demonstration that we carried out in front of the police station on Acosta Avenue. Those events were the triggers for my incarceration. I am a prisoner because of Raul Castro’s tantrum, of that I have no doubt. I call it a tantrum to make a decision that does more damage than good, to persist in satisfying his ire. You have to be sick with power to carry out the violations that historically the Castro brothers have to hit out against those who have opposed them.

What do you remember about the trial?

A handwriting expert, Lieutenant Colonel, made me copy nothing less than fragments of an economics article in the Granma newspaper.  According to them, by the heights of my letters and the slant, I am guilty.  It sounds like a joke, but it is real.  My lawyer argued that the handwriting proof is not defining.  It is not accepted internationally.  It is a pseudoscience.  The expert insisted that it is a science, which dates to the 17th century, and that it was defining. My lawyer, young, cited several handwriting specialists, whom she did not know, according to what was argued in the trial.  They are on the internet and their literature is found in Havana, which she also did not know. It was evident that she had gone there without preparation, only to follow an order of the State Security. They refused my five witnesses, and did not admit the arguments of manipulation. They imposed a five year sanction on me which was not for the crime that they imputed to me.

How much benefit will you extract from prison as a writer?

It has been a great experience. I try to get the best and greatest benefit. Surrounded by killers, drug traffickers, thieves. I have the best relationships with them. I take advantage by writing and finishing some literary projects.  I finished the novel The Summer that God Slept. I sent it to the Frank Kafka Novels from the Drawer Contest in the Czech Republic, and I received the news that I had won the award. Tremendous happiness!

The book relates the agony of a group of boat people who escape on a raft, the vicissitudes of the sea, picked up by a boat that takes them to Guantanamo Naval Base, life in the camp, the indisciplines, the corrections, the internal problems that emerge, until they decide to return to Cuban territory crossing the mined country that is in the zone.  It has a lot of testimony.

To be in a less rigorous prison setting and to give you a pass, that you received recently, will that be a form of ceding by the government?

To the contrary. I believe that they distanced me from the jail conflicts that I constantly denounced in the prior jails through which I passed. I got involved in inmates’ situations and defended them. For my punishment, I’ve been assigned to the “minimum” incarceration regimen, that is to say, less danger, from what I can tell, by regulation, to be in camp and not in maximum security prison.  Sending me to prison 1580 was a violation of their own laws.

In the camp one leaves with a pass every sixty days.  In seven months here, I should have left many more times, but State Security did not want it.  Here, where I am, the inmates go out every 27 days, but as I do not work or collaborate on re-education, they do not permit me to leave monthly.

On the other hand, I have always had positions in Freemasonry, the latest was at a national level, and I had to dedicate a lot of time; also, the free thinking project of Estado de Sats… I gave that space all the time necessary because it seems to me a laudable and tangible purpose for the political change that Cuba needs.  So once a prisoner, I told myself: Get to work!

LA HABANA, Cuba, 8 October 2013, Juan Carlos González Leiva/ www.cubanet.org.- The life of political prisoner is in serious danger. He has been on a hunger strike for three weeks, in Guamajal prison in Villa Clara. The news was passed on this Monday, October 7, to the Cuban Council of Human Rights Rapporteurs (CRDHC) by his sister, Maritza Abreu.

Maritza said this this Sunday morning she was able to converse with her brother by phone for a moment, during which she heard some unintelligible words because he can barely speak

The source added that she received a phone call from the head of prisons for the province of Villa Clara, who authorized the brief phone contact. He told her he would let her see Bonora to ask him to abandon his hunger strike.

Abreu Bonora, who remains in legal limbo and has been waiting 14 months for a trial, had announced to the protest to the CRDHC before beginning it, at which time he told them he would not abandon it until he was released, because, according to what he said, he had been unjustly imprisoned.

He was imprisoned on August 13 of last year, for making anti-government statements that day, on Obispo boulevard in Old Havana, the date on which Fidel Castro’s birthday is celebrated. He had been paroled a year earlier, after having engaged in a long and dramatic hunger strike in the prison, proclaiming his innocence, in relation to an accusation of the supposed crimes of Assault and Contempt.

HAVANA, Cuba, September 6, 2013, Juan Carlos González Leiva / www.cubanet.org.- Political prisoner Daniel Camacho Marchena was released in Ciego de Avila earlier this week, according to what the former prisoner himself declared during a visit he made to the Council of Human Rights Rapporteurs after leaving prison.

He had been revoked and imprisoned on January 17, 2013, in the Canaleta Provincial Prison of Ciego de Avila, for writing anti-Castro signs on the public walls in the city saying: Down with Fidel and Raul!

Camacho Marchena was on parole because previously he was sentenced to four years in prison in joint sanction, which expired on August 29, 2013.

He is 43 years old and a member of the Council of Rapporteurs of Human Rights in Cuba and in the Municipal Democratic Circles.

He lives at No.93 D Street, between Maceo and H Castillo, Ciego de Avila.

Camacho is now in dire economic conditions. Making his situation worse is that he has a one-year-old child.

Juan Carlos González Leiva. Member of the Council of Rapporteurs of Human Rights in Cuba. A collaborator with Cubanet for several years.