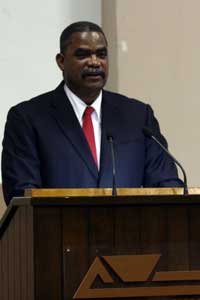 The Havana capital will welcome the sessions of the Sixth International Meeting of Justice and Law in the Conventions Palace the next 23rd to25th of May. More than 500 delegates will meet; of those, 300 are foreign jurists from 14 nations.

Among the prioritized themes to be discussed are found access to justice on the island, the re-education work in Cuban prisons and criminal due process, according to the note published on the website www.gpalco.com. As with earlier editions, there will be an official presentation about the case of the five Cubans sentenced in the United States for spying for the Cuban government.

Ruben Remigio, president of the Supreme Tribunal, sponsor of the event, said in a press conference offered last Thursday, that the meeting will permit Cuba to show the advances in its judicial plan, in the process of procedures and the transparency of the administration of justice.

“The meeting will be a ’sounding board’ to present a counteroffensive against the orchestrated campaigns for the major press, that tries to discredit Cuba and silence its achievements in the administration of justice,”added the jurist.

Remigio boasted of the victories of the Cuban Revolution in justice as”favoring the exchange of experiences among different judicial operators.” Nevertheless, not all jurists will be represented in this debate. Only lawyers from state sectors have access to the convention. Also, an Organizing Committee is charged with selecting those reports related to political concepts of the government.

Laritza Diversent and this writer, though we are both lawyers, have never participated in this kind of event. “I have not attended the convention. The only objective of the organizers is to paper over the chinks in the Cuban judicial system,” commented Diversent.

Among the missing matters of the congress are the inadequate assessment of proof on the part of the Tribunals, the forced or slave work of the prisoners of the island and the advantages of an independent judicial power. Maybe a deep analysis of these topics will avoid another international meeting without justice and without rights.