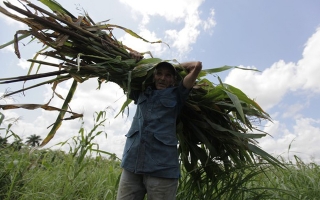 With the title “The Land Belongs to Those Who Work It,” the newspaper Granma published an editorial on May 17, in commemoration of “Peasant’s Day” from which I have selected three points that invite reflection.

One: The Agrarian Reform was a basic need for economic liftoff.

An affirmation that I share, since the concentration of large tracts of land was, and is, in addition to a generator of social injustice, a major obstacle to the diversification of agricultural property, roots, the sense ownership and development.

In the beginning, in the sixteenth century, large tracts did not hinder the formation of a class of small owners. It was the growth of the sugar industry, accelerated by the Haitian Revolution, which ruined the economy of this neighbor island, which led to the fact that from the late eighteenth century Cuba occupied the number one position in the production and trade in that product. That leap accelerated the conversion of cattle ranches common estates — haciendas — and multiplied the number of mills by promoting the growth of small and medium ownership. It was from 1860, due to increased production capacity, that the larger mills swallowed up the smaller ones, leading to the separation between agriculture and industry and the emergence of the figure of the tenant farmer. However, these transformations did not lead to the concentration of large land areas, as the tenant farmer, who settled on tens of thousands of farms, supplied the necessary cane.

It was in the late nineteenth century, resulting from the struggle for raw materials, where the competition between mills for more land originated, from which emerged the modern large estate. This process accelerated after 1902 with the orders issued by the Government of Occupation, which authorized the investors to purchase and expropriate land for railway lines and to install new plants. As a result, the penetration of foreign capital concentrated in about 180 mills, a fifth of the country, as reflected in the 1946 census. Of a total of 159,985 farms, fewer than 12% had 76% of the land, while 24% of the remaining area was scattered in 142,385 farms, with their respective owners.

That anomaly so vital to the Cuban nation, attracted the attention of illustrious figures of our history, from the Bishop Espada in 1808 to Manuel Sanguily in 1903, passing, among others, José Antonio Saco, Francisco de Frías, José Martí, Enrique Jose Varona, Martín Morúa Delgado and Fernando Ortiz, who argued for the need for small and medium land ownership and the existence of a national middle class. However, the social struggles, the measures taken by the Republican leaders, and the brake on large estates, endorsed in the 1940 Constitution, were insufficient to reverse the ownership of land to those who worked it.

Two: It was precisely the Agrarian Reform Law that defines the Cuban Revolution.

In his legal brief, History Will Absolve Me, in 1953, Fidel Castro — taking into account the adverse effect of large estates and in order to win the support of the peasantry — proposed to grant land ownership to all who hold parcels of five or fewer caballerías (one caballería equals about 33 acres). This project, launched in October 1958 during the insurrectionist struggle, formed the basis of the First Law of Agrarian Reform, which liquidated the estates in the hands of Cuban and foreign companies, benefiting some 100,000 farmers and defining the 1959 Revolution as advanced, agrarian, and democratic.

However, 40.2% of the confiscated lands remained in state hands. Then, with the Second Agrarian Reform Law of 1963, the thousand farms that had more than five caballerías went directly to swell the collection of state land, which increased to 70% of the country’s arable land. So sudden was the turn, that if the First Law was allowed to define the Revolution as advanced, agrarian and democratic, the Second Law marked it as totalitarian, in concentration an amount of land greater than that possessed by the great estates that had been confiscated.

In 1974, the fifteenth anniversary of the Agrarian Reform Law, the chief of the Revolution urged the peasants to tackle “higher forms of thinking about production, since the course of development of the country can not be stopped, since the growing needs of the population necessitate a constant modernization of our agriculture, and an optimal use of all the land ” [1] .

With this supposed end, they developed a process of induced formation of cooperatives, through the creation of Embryonic Cooperatives, Mutual Aid Brigades, the Credit and Service Cooperatives (the only ones in which the farmers retained ownership of the land and means of production, but they lack legal status), and Agricultural Production Cooperatives; meanwhile state ownership rose to 75% of arable land.

Three: The Law established the principle that the land belongs to those who work it.

Given the decrease in production and efficiency brought about by State ownership, Raul Castro, in his speech in Camagüey on 26 July 2007, acknowledged the shortcomings, errors and indolent or bureaucratic attitudes as reflected in fields infected with the marabou week, and argued that the rising cost of food in the international market forced us to produce it in Cuba. However, nothing was said of the unworkability of the State-owned large estates, nor of the fact that in privately owned lands the marabou week is kept under control. At that juncture they enacted, in 2008, the Decree Law 259, for delivery of vacant land in usufruct*.

If usufruct consists of enjoying the use the property of others, in this case the huge properties of the State, and the land becomes idle, what is the reason for the private producers, who have demonstrated the ability to produce efficiently, to be tied to usufruct agreements — that is to be essentially tenant farmers — and for the State, responsible for inefficiency, to be the owner? Why doesn’t the land belong to those who work it?

Translator’s note: Usufruct is the right to use and enjoy the profits of something belonging to someone else. In Cuba, Decree 259, of 2008, established a system of limited term usufruct to turn over idle lands to people who want to work it.

[1] J. MAY. Two decades of struggle against landlordism. Brief history of the National Peasant Association, p. 21