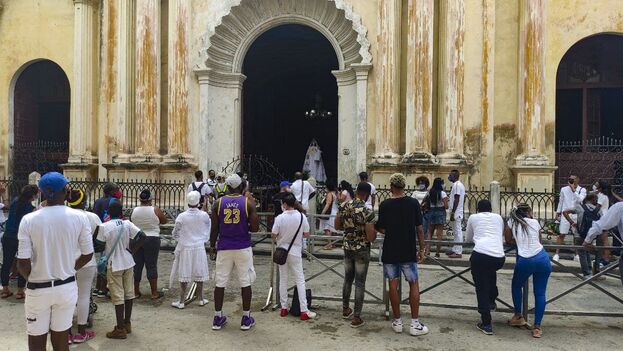 14ymedio, Juan Diego Rodríguez, Havana, 24 September 2021 — Surrounded by metal fencing to control entry and with a strong police operation reinforced at each corner, this is how the Church of La Merced in Old Havana looked on Friday. Despite the rigors of the pandemic and the rain, hundreds of devotees came to this temple to place a candle before the “Patroness of the Incarcerated.”

Located in the neighborhood of San Isidro, the church is frequented by both the Catholic faithful and those who worship the greater orisha Obbatalá, with whom Our Lady of Mercy is syncretized in Santería. Dressed in white, the faithful arrived early on September 24 to pray specifically for those locked up in prisons.

The location of the church could not be more perfect. San Isidro has been the center of Cuban rebellion since Luis Manuel Otero Alcántara and other activists founded the Movement that bears this neighborhood’s name and that has led loud, rebellious acts. Today, the artist is in prison, as are other members of the group, and the State Security closely monitors the area.

For many Havanans, this impoverished section of the Cuban capital is considered the site where the spark that fueled the popular protests of July 11th started. Although the first demonstrations took place in San Antonio de los Baños, Artemisa, civil disobedience had begun to take shape much earlier, in a humble house on 955 Damas Street near the Church of La Merced.

San Isidro has been the center of Cuban rebellion since Luis Manuel Otero Alcántara and other activists founded the Movement that bears this neighborhood’s name and that has led loud, rebellious acts

San Isidro is also a neighborhood where a thin line stands between any young person and prison. Poor, largely dedicated to the illegal market, and with fewer economic opportunities than those in other more prosperous municipalities, many neighborhood families have one or more relatives who have been convicted by a court.

In a country with more than 90,000 incarcerated people, this is not unusual; in proportion to its population, Cuba has the largest number of prisoners in the world. Increasingly worrisome, the regime has unleashed massive arrests and judicial prosecutions following the demonstrations calling for “Freedom” and the end of the current system.

Hence, so many have come today to the altar of the patroness who “liberates, consoles and protects” all who are deprived of their freedom, on this her first Feast Day after the events of July. This is also why the police appeared so nervous around the Church and why the plainclothes officers patrolling the building looked questioningly at anyone who approached.

Along Cuba Street, the fencing, patrol cars and police motorcycles blocked access to vehicles from two blocks away on either side of the Church, although these areas were open to pedestrian traffic. “They are there watching because they know that during these religious events anything can happen, such as requesting freedom for the prisoners and more so now,” a young man commented to this newspaper.

Along Cuba Street, the fencing, patrol cars and police motorcycles blocked access to vehicles from two blocks away on either side of the Church

After crossing the police fence, visitors were required to form a line to place flowers and candles on a railing at the chapel. Church staff then arranged the offerings closer to Our Lady of Mercy. It was possible to enter a second queue to get closer to the statue but “without taking photos”, clarified a young man to whomever he saw with the mobile phone in hand.

In any case, it was of little use to try to send an image or a video as the internet connection barely worked. “As soon as I arrived, everything got very slow, I couldn’t even send audio,” commented a young man who was waiting to leave his flowers. “I don’t know if it’s because it’s cloudy or because they have deliberately slowed it down in this area, in case something happens,” he added.

For those who could not reach the chapel, there were always gestures of remembrance and veneration in their own homes and on social media networks, which this Friday were filled with photos of candles, white clothing, and cotton candy or rice pudding, foods traditionally offered to the African orisha. Calls for amnesty for political prisoners also abounded.

One of those who spoke out for the incarcerated was the singer Haydée Milanés: “Today, on the day of the Mercy, Obbatalá, I ask for peace for all Cubans. I also ask for freedom for political prisoners. Incarceration, persecution, repression, censorship, will never be the way. May Obbatalá’s blessing reach us all.”

Text of Tweet: Surrounded by metal fencing to control entry and with a strong police operation redoubled in each corner, this is how the Church of La Merced in Old Havana looked on Friday. Hundreds of devotees came to this temple to place a candle before the “Patroness of the Incarcerated”