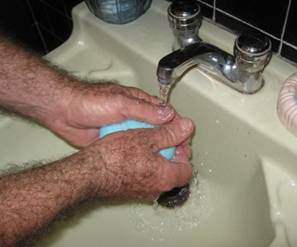 Once again this year, our friend, who does not like to go backwards nor drive long distances, invited us to take her in her car to El Rincon and back again, to lunch in a very good paladar – private restaurant – in Santiago de las Vegas, as a gift for my birthday

We left about 10 in the morning to allow a little time in the sanctuary and to investigate a bit, on the way back, looking for onions, as they are very rare and expensive in the city.

I noticed, with pleasure, that after a year, those broken roads had been repaired. We hypothesize that it was because of the proximity to the upcoming Saint Lazarus’ day.

During the trip, we were able to observe that many people were walking from the last bus stop in Santiago de las Vegas. Others climbed aboard carts pulled by pairs of horses, carrying twenty people. It was almost a medieval vision. Improvised flower stalls were on both sides of the road, and in the doorways of some of the houses were tables full of plaster images representing Lazarus, Chango, and some other deities. Also the odd stall selling pork, just hanging there, without any refrigeration. The day was cloudy but very hot.

The most pleasant surprise was upon arriving at the church. Newly painted, and with very well tended gardens. I immediately noticed the absence of the sign that was on the front door last year, spelling out some of the prohibitions with regard to dress and conduct, for those who wished to enter the temple. The church was filled with believers, despite being almost twenty days before the awaited celebration. Many young people and children, as well as a large line of people of all ages, were waiting to receive the blessing. The altars of Lazarus and the Virgin of Charity were filled with flowers and candles. A young woman dragged herself to the altar, fulfilling a promise. I was extremely comforted to note that, despite the years of prohibition and shortcomings, the popular faith is growing every day.

Translator’s note: December 17th is the day of Saint Lazarus, the Patron Saint of the sick (also known in the Afro Cuban culture as Babalu Aye). Pilgrims come from all over the island, some crawling hundreds of miles, to the Sanctuary of Saint Lazarus, in the El Rincon neighborhood at the southern edge of Havana.