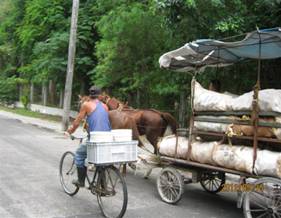 There are those who think that, given the ongoing deterioration to the healthcare, education and athletic systems, the main monuments to Cuban socialism are the plazas of the revolution, built mostly in provincial capitals and in some municipalities.

Nothing could be further from the truth. The main monuments to Cuban socialism are the countless failed projects and plans scattered throughout the country.

There was a textile plant in Santiago de Cuba, which would have produced all the fabric necessary to clothe every Cuban. The towel factory, which would have manufactured ten million towels annually, one for every Cuban at the time. The plan for growing micro-jet bananas, which were supposedly adaptable to climate variations anywhere in the country. The candy and soft drink factories in every province, which were supposed to meet the needs of children. The list goes on and on, but you get the idea.

One crazy idea after another, none of which were based on economic reality. We have spent too many years applying fanciful economic policies based on volunteerism, presenting imaginary ideas as though they were attainable realities, with the goal of keeping hope eternally alive for a people mired in poverty. It would be best if, in this time of economic “updating,” we did not add any new “monuments.” The ones we already have are more than enough to guarantee that no one forgets what socialism in Cuba represented.