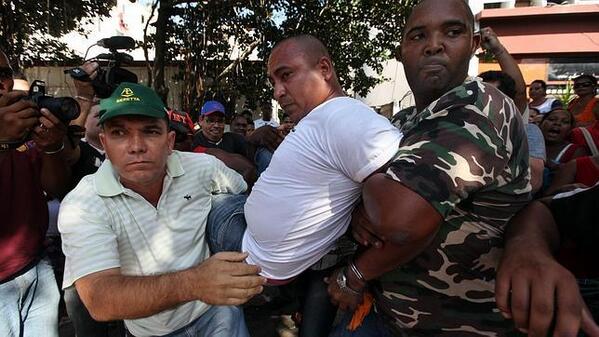 The Cuban government has cracked down hard on dissidents who dared to go out on December 10th, the day when the world celebrated Human Rights Day, according to sources from the island who have posted on the social networks.

In Baracoa, Jorge Feria Jardinez and Roneidis Leyva Salas, activists with the Eastern Democratic Alliance (ADO) and the John Paul the 2nd Movement, were arrested while distributing leaflets about this issue, said Rolando Rodríguez Lobaina, ADO Coordinator, in his Twitter account (@ Lobainacuba).

On the same social network, Lobaina reported arrests, beatings, and acts of repudiation in locations around Buenaventura, with the detention of Nelson Avila Almaguer, Ramón Aguilera, Jorge Carmenate, and Nirma Peña, all four with ADO. He added that activists were stationed in front of the town’s police station demanding the release of their brothers in the cause. In the same province, but in the village of Velazco in the municipality of Gibara, paramilitary mobs in coordination with State Security and the National Revolutionary Police (PNR) attacked the house of activist Damaris García, fired tear gas, and beat and arrested peaceful activists.

Among those arrested with Damaris were Marta Alina Rodríguez Pérez, Walfrido Pérez García and Gelasio Pupo Verdecia, all from the same opposition alliance.

In the capital arrests occurred when activists, artists, and other members of the independent civil society tried to reach the headquarters of the Estado de Sats Project, led by Antonio Rodiles. According to the twitter account of Ailer María (@ ailermaria), his wife and arts coordinator of the project, they had learned of more than a dozen arrests that occurred starting on December 9th when participants in the 1st International Conference on Human Rights tried to approach the site. The venue was harassed by an act of repudiation, a military siege, and a “revolutionary act” by the well-known orchestra “Arnaldo y su talisman,” according to reports arriving from Havana. Other groups suffered persecution, harassment, and abuse at their homes.

Bertah Soler, leader of the Ladies in White and 2005 Sakharov Prize winner, was arrested along with her husband, Angel Moya Acosta, when she had summoned her members and the entire civil society to march and gather on the corner of 23rd and L, across from the Coppelia ice cream parlor. Those who made it were violently arrested and transported to remote places; Soler was taken to the village of Tarara.

On the morning of December 10th, President Raul Castro attended the funeral of South African president Nelson Mandela. He was greeted with an unanticipated “handshake” by U.S. President Barack Obama, who said in his speech: “There are leaders who support Mandela and do not tolerate dissent,” a clear allusion to the Cuban dictator and to the President of Zimbabwe, Robert Mugabe, also present at the gathering.