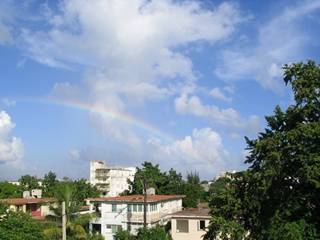 He was known as tall, dark and handsome and he boasted of it and of the “power” which he had enjoyed for a long time, not so much in his own right, but by that which the powerful godfathers would make possible.

Always dressed in camouflage and carrying a rifle on his shoulder, even during the Special Period, he got out of his jeep and unloaded the game he had obtained that day: a deer, partridges, and some other unfortunate animal that fell under the fire authorized by his weapon. He never shared his booty with a neighbor, for he was enemies with all. At the slightest disturbance created by any neighbor, he would leave his apartment in the worst of all his handsome stances and brandish his fist, without considering the consequences of fighting over the disturbance. This earned him the nickname Marshall Bigdick.

Once, he badly beat up a young doctor who was trying to calm the cries of the baby in his arms, which became the trigger that made bad mood of the handsome hunk explode. They were taken to a police station and the assailant only remained a few hours in detention, because his powerful backers immediately went to release him. His victim was admitted to the hospital as a result of the beating, but then had to swap housing due to the constant threats from the thug and the impunity with which he acted.

After the passage of several years and various other incidents, the abuser is now a man of a certain age. His reputation has faded now that two of his godfathers have died, and although one is still alive, he is by now quite old.

No more than three days ago the guy had the nerve to barge into the home of his next door neighbor, accompanied by two workers from the gas company, under the pretext that there was a leak in her house.

The husband of the owner blocked his way, saying that, without proper authorization, he could not enter their house, much less excavate in their garden. He pushed the husband aside and ordered the men to begin work.

Summoning strength from who knows where (as I was later told), the wife of the assaulted man grabbed the guy by his shirt, pushed him against the wall and slapped him around a couple of times. She is a quite small and delicate woman. As a result the police showed up, after receiving a call from another neighbor, and took everyone to the police station.

The thug was fined for breaking and entering, and a restraining order was placed against him.

After learning the details of the dispute, the entire neighborhood has new respect and admiration for this fragile woman, who was able to stand up to the handsome guy in a way no man had, up to that point, ever dared to do, possibly more out of fear of his godfathers than of him.

Any similarity with actual persons, living or dead, is not, I assure you, purely coincidental.

Translated by: Rafael Gómez and Anonymous