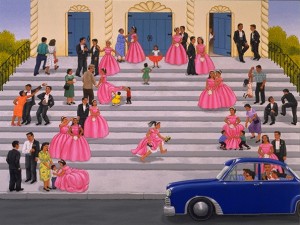 Yesterday’s afternoon, Yusaimi spent four hours in the studio of a professional photographer.Surrounded by lamps, umbrellas, a mirror in the background, she spent all the time changing clothes and posing like an international model.

She ended up exhausted. After getting home, she quickly ate a light snack and went back to pose again.This time it was for a video with her parents, her boyfriend and friends. Around 12 o’clock at night, before crashing in bed, she went over the details of the preparation of the party with her parents.The next day was worse.

Starting at 9:00 in the morning, her home began to be invaded by relatives, friends, a makeup artist, and a popular hairdresser. She felt like an outsider, but happy. Some of her relatives from Miami had traveled to Havana to celebrate Yusaimi’s 15th.

It cost a lot of money. Since the girl was 5 years old, her parents started saving. So, the day of her 15th, the money-box had about 1,100 CUC (convertible pesos).It was only enough money (just under a thousand dollars) to start organizing the party.

If you asked them about the cost of the party, including the photo shoots, the clothes, and the well-staged choreography for the opening of the party, they would respond with a smile: “we’d rather not talk about that. She is our only child, and money would be never enough. She deserves it for all the effort she puts into school. And because you only turn 15 once in life, what the heck”, says the father excited, holding a glass of Santiago rum.

The Yusaimi’s quinceañera party was an event in the neighborhood. It cost an arm and a leg.They rented a room in a five-star hotel, and hired a well-known television announcer.They took dozens of pictures and videos. Makeup and hairdressing was carried out by experts. The buffet and the cake were a luxury. And such was the amount of alcohol, that almost all the guests left the party reeling.

And even, the relatives from Miami paid for an all-inclusive hotel in Varadero for the young woman, her boyfriend and parents, 5 days and 4 nights. When the years go by, Yusaimi will go through the pictures and videos of that memorable day, sitting on a vinyl sofa, with her husband and children.

Yet, this quinceañera is still distant from the time she will have to deal with the daily hardships from this unfinished and extravagant socialism designed by the Castros.It is possible that by then many things will have changed.

What seems certain, that despite living ruled by autocrats or their descendants, under the feet of military corporations, in a State-run corporate capitalism, or in a free society with elections every 6 years and as many political parties the number of cards in a card game, is that the Quinceañera parties will still exist in Cuba.

Although it may seem corny, crazy, and a waste of money, this custom will remain within Cuban society.

Traditions are traditions. In the Spanish city of Pamplona, on July 13th, Day of San Fermin,people go out in the street to run in front of bulls; it is almost authorized suicide. In other countries, when young people turn fifteen, their relatives release from the top of a steeple a goat in a sack.

In the United States, the President releases a turkey on Thanksgiving Day. And on Halloween, children dress up in costumes and knock on their neighbors doors asking for sweets and candies.

In some of Australia’s remote places, once a year, the feast is dwarf tossing, the farther the better. And in Africa and Middle East regions, a man can have up to 6 wives.

Traditions are identity stamps. And quinceañera parties have become a Cuban ritual, whether we like them or not.

Photo: Painting by Arsenio Cícero, published on the web Myths of Latin America.