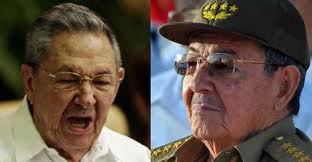 The speech by General Raul Castro Ruz at the regular meeting of the National Assembly was opportunistic and authoritarian. To denationalize Cuban society, as a decision of the State, does not mean much, especially when political discourse doesn’t reflect the real need for a non-state sphere, or limit the unlimited powers of the Party and State. On the contrary, it mitigates and releases the State from an obstacle that consumes it.To pretend and gain time is an interplay to recover and strengthen the State. He made it very clear by saying “We are not abandoning, even for a moment, the unity of the majority of Cubans around the Party and the Revolution, that unity that has helped us get here and continue to move forward in building our Socialism.”

Why is Raul blaming the endemic corruption on Cuban leaders, and not putting his brother Fidel at the top the list? What is the meaning of the letter he read before the beginning of the long-awaited regular session of the assembly? It says, “You brought us freedom, gave us land and labor.” Manipulation is the word, a direct way to monopolize opinion. Conditioning the audience is the same as censoring it.

The parliamentary bacchanal only reports. There was no confrontation of ideas nor a free and plural debate. As always it was a poor simulation, a cathartic adulation among people who share the same ideological position, similar ethical principles, a single party and the same aspirations. What else could we expect?

Mr. President, no doubt you need to restore lost confidence to the people. The measures or maneuvers, however you call them, to reshape immigration policy, subsidize the sale of some building materials, make housing policy more flexible, authorize the purchase and transfer of cell phones, cars and houses,rearrange the sugarcane zones, sell agricultural products to tourist-industry complexes, and expand the area of land in usufruct serve only to give credit and acknowledge a young, new social class, so it will give you support and backing.

Talking about the future of Cuban socialism as something new, forgetting the present, creates a laughable disappointment. It crosses the line in its disrespect of the Cuban people.

The President-General, Machiavellian and hypocritical, made a show of a benevolence that he doesn’t profess and needs to represent. He announces as a commendable decision that he is pardoning over 2,900 prisoners. He says further that he took into account the announced visit to Cuba of Pope Benedict XVI, and the celebration of the 400th anniversary of the discovery of the image of the Virgin of Charity del Cobre.

He should be ashamed; at the least he should be scolded. The release of those prisoners, among so many other interventions and pressures, national and international, is the essential result of the unequaled prowess of the LADIES IN WHITE. Raul Castro is too dishonest, and too insignificant for my taste.