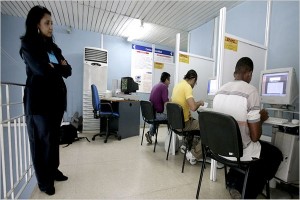 All content considered “antirevolutionary” is automatically blocked. All information that is published in the media is filtered, according to the criteria of the Party.

Cuba continues preventing the majority of its population from having access to a free (i.e. uncensored) Internet, even though the submarine fiber-optic cable, ALBA-1, coming from Venezuela and the unblocking of some web sites constitute a ray of hope. The Castro regime has developed an original model of control, based on the existence of a local Intranet. Access to the Internet is excessively expensive. The prices are prohibitive. Add to that the omnipresence of the government institutions.

The country’s organ of censorship, the Department of Revolutionary Orientation (DOR), filters all the information that is published in the official communication media, according to the Party’s criteria. They automatically block all content considered “antirevolutionary.” This censorship, that applies not only to the web, it is based on the Penal Code in force that criminalizes “disrespect,” “defamation,” “slander,” “insults,” and “offenses against the authorities, the institutions of the Republic, and the heroes and martyrs of the nation,” among other things.

The Ministry of Computing and Communications

It was created in the year 2000 with the goal of ensuring respect for the Revolutionary ideology defended by the DOR on the Internet. There is very little information available on the technology that the Cuban authorities employ in terms of censorship. The University of Computer Sciences (UCI), as well as the Telecommunications Company of Cuba (ETECSA) — the national provider of access to the Internet — work with the departments of surveillance and censorship that back up the actions of the Ministry. The blockade of Internet content is carried out by ETECSA.

The year 2011 was marked by certain concessions of the government, like the unblocking of some web sites. This is the case with the sites Desde Cuba and Voces Cubana (From Cuba and Cuban Voices), where numerous opposition blogs are posted, among them Generación Y (Generation Y), whose author is Yoani Sánchez.

However, the detention of a dozen bloggers and netcitizens at the end of 2012, among them Calixto Ramón Martínez, who was freed seven months after being in prison, counteracted this small advance. Although these interruptions were more sporadic in 2013, it’s accurate to note that the changes in Cuba are millimetric and that the situation remains stagnant.

In 2008, the percentage of connectivity to the Internet was about 1.2 percent of the population. Since then, the number of public points of access to the Internet has increased: According to the authorities, in June 2013, 118 new cyber-salons were inaugurated.

However, the price of connecting continued to be prohibitive: the equivalent to one-third of the average monthly salary of a Cuban (some US $21). The authorities claim that in 2013, four out of ten Cubans accessed the Intranet regularly, which allowed them to read their email, as well as some pages of official sites. According to the independent bureau of information, Hablemos Press, this figure is reduced to two out of 10. It’s possible to get on the Internet in the international hotels, but the usage is reserved for tourists, who can allow themselves to spend US $10 (two weeks of salary for a Cuban, on average).

Furthermore, the connections are surveilled almost systematically. To get on the national network, Cubans must present their identity cards; they surf below the vigilant eye of cameras and the surveillance agents in the cyber-cafes.

Also, the computers are equipped with programs like Avila Link (a link in English), developed in Cuba, that can cut off the connection at the least suspicion of “some violation of the norms of ethical behavior that the Cuban state promotes.” Independent informative Cuban web sites hosted outside Cuba, like Cubanet, Martí Noticias, Cuba Encuentro, Payo Libre and Hablemos Press, are on the black list, and it’s not possible to have access to them, even from the Internet in international hotels.

For a long time the Cuban authorities have attributed the difficulties of connecting to the Internet to the U.S. embargo. However, now that Cuba has the ALBA-1 fiber-optic cable, this argument becomes obsolete and makes it obvious that the authorities want to control the Web, showing their fear of Cubans being able to have free access to the Internet. The use of the high-speed Internet, which is now possible with ALBA-1, is mainly restricted to government officials.

If we believe the official declarations, 2014 should be a good year for accessing the Internet in Cuba. ETECSA forecast that it would begin to install DSL lines at the end of 2014 in zones that have the adequate technology. It’s cruel, but the country lacks infrastructure and the necessary funds to install it. The telephone network is not developed for this type of connection and is under total control of the national service provider, ETECSA. Under these conditions it’s difficult to imagine that the arrival of DSL on the island would have a big impact.

Last January they also announced that Cubans could access the Internet from their mobile phones, thanks to the vigorous entry of a measure that permits telephone bills for users on the island to be paid by people in the Exterior. But the cost of the foreign recharge, more than an opening for Cubans, is an economic strategy to get hard currency into the country.

In spite of this, some analysts observe that there is a tendency toward opening. The informative website Cubanet, based in the U.S., made seven technological predictions for Cuba in 2014. Among them were access to the Internet through mobile phones, the development of WiFi on the island, and even the possibility that the activists could travel outside the island, and acquire knowledge and education in computer science useful for their security online: all this thanks to the immigration and travel reforms that entered into force on January 14, 2013.

In the report on the “Enemies of the Internet” in 2012, Reporters Without Borders denounced the Cuban propaganda, which “didn’t stop attacking the bloggers who were critical of the regime, whom they accuse of being mercenaries in the service of the ’U.S. Empire’.” The bloggers “have been victims of campaigns to discredit and defame them in the State media, on propaganda sites outside the island, and in blogs like Blogueros y Corresponsales de la Revolución (Bloggers and Correspondents of the Revolution) and Las Razones de Cuba (The Reasons of Cuba).

The cable from the U.S. government — spread by WikiLeaks in 2009 — that suggested that the Regime feared the bloggers more than other types of dissidents, is more real than ever. During her world tour, Yoani Sánchez announced that she would launch a digital daily newspaper in Cuba. “The first day that we do it could be the worst; they could shut it down and attack all of us by blocking us from the web,” she said. “But it could also happen that we are sowing some seeds of a free press,” she added.

By contrast with the obstacles to access the Internet, information passes from hand to hand through USB flash drives. Some also try to create illegal points of access to the Internet. But government agents are in the streets to detect and destroy satellite antennas, so that there are real risks for people who try to have them.

Furthermore, they have positioned antennas to block the signals every five square kilometers. The netcitizens sometimes can use Twitter to send an SMS, without being sure that their messages will appear on Twitter. This microblogging frequently is not detected by the blockades orchestrated by ETECSA, which sometimes last for months.

The bloggers and collaborators of opposition websites like Hablemos Press or Payo Libre, are obliged to turn to certain diplomatic locations in order to publish their writings on websites outside the island.

Others, like the group Martí Noticias, located in Miami, count on correspondents on the island. The purveyors of information found there often are victims of raids in the communication media where they work, or of arbitrary detentions.

The writer and author of the informative blog, Los hijos que nadie quiso (The Children Nobody Wanted), Ángel Santiesteban, was imprisoned, and his lawyer was suspended, so that she couldn’t practice law in the courts for a period of six months. The blog continues informing us about the situation of Ángel Santiesteban Prats, thanks to the work of activists who collaborate outside Cuba.