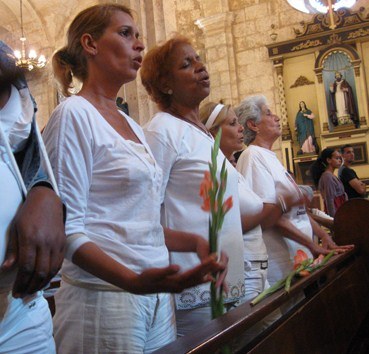 Today I heard that the independent journalist Dania Virgen García is being warned by State Security that her constant opposition to the system is disturbing to them.

For this, as is their modus operandi, they use criminals, who are themselves, as you can see in the clandestine videos when they abuse the Ladies in White and the opposition in general. First she suffered a freak accident, I remember that I heard it from the prisoner of conscience David Piloto, when I was in that horrible Prison 1580. In the accident she suffered a broken leg. If that weren’t alarming enough, we have to add that when Dania Virgen suffered the “accident” she was with her grandson.

We know that State Security doesn’t send warnings for nothing, they continue to escalate, to the point of taking your life if necessary, and if they have entered her home on several occasions, it’s no surprise that in this scene there is a script where Dania Virgen seems to have been murdered by some criminal who flees and is never found.

I know it seems like a grade-B movie, but it’s enough to look at what has happened in the last three years with the dissidence, to understand what they’re capable of to stay in power.

They know Dania Virgen is stubborn because her denunciations appear everywhere, she is a busy active Human Rights Activist, always attentive to news of abuses and violations and writes them up and circulates them. Her value as an opponent to the dictatorship is vital. A brave and determined woman respected for her decision to fight against the totalitarian regime, she has publicly warned them that she will not think of abandoning the country to save her live, and mentions Laura Pollán, because like her, she warns them, they will have to tear her life from her.