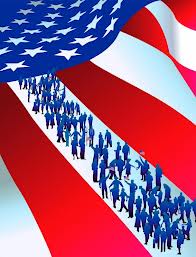 HAVANA, Cuba, October, www.cubanet.org – Should the controversial law be annulled or changed? No Cuban who emigrates does so for purely ‘economic’ reasons. Hundreds of thousands of our fellow citizens, persecuted or not, live freely in the U.S. thanks to this law.

“It’s hard to argue that Cubans who can come and go as they please need special considerations, normally reserved for victims of political repression,” stated the influential Chicago Tribune, referring to the Cuban Adjustment Act .

The controversial law was passed by the U.S. Congress in 1966, and provides a special procedure for Cuban-born or Cuban citizens and their accompanying spouses and children to obtain permanent residence in the United States. The Cuban Adjustment Act (CAA, its acronym in English) gives the Attorney General discretion to grant permanent residence to Cuban natives or citizens seeking their green card if they:

The Cuban regime’s official newspaper describes the Cuban Adjustment Act as “murderous”. It has stated that the law was passed in order to encourage Cubans to leave the country illegally, thus endangering their lives under the illusion of the American dream.

The Cuban Adjustment Act was not won over by the Cuban-American right; it was created by the Democratic administration of Lyndon Johnson for thousands of Cubans whose admission process was changed to “fleeing from a communist regime” from “refugees under threat of persecution”.

But, with the passing of the migration reform that became effective in Cuba and that – it’s said — allows for more liberal granting of passports, for most Cubans to come and go at will, and for the actions of President Barack Obama in 2009 to facilitate travel to the Island by Cuban-Americans, Cubans arriving in the U.S. benefit from the Cuban Adjustment Act, and, after a year in the U.S. return to the Island, carrying goods and merchandise.

U.S. Sen. Marco Rubio [R., Florida] is of the opinion that the 47-year old law giving Cubans special status to obtain permanent residence in the United States should be “re-examined”.

Two other Cuban Republicans in Florida, Reps. Ileana Ros-Lehtinen and Mario Díaz-Balart of Miami, also have called for changes to the law.

“The Cuban community in the United States is divided”, says Jaime Suchlike, director of the Institute for Cuban and Cuban-American Studies at the University of Miami (UM). Some have family they wish to be in contact with, while others say the law removes any motivation for people to remain in Cuba and confront the government.

Cubanet wanted to know the opinion of three of its writers:

The Adjustment Act is, along with the Embargo, one of the most controversial issues on the subject of US- Cuba relations. Personally, I find it difficult to criticize a measure that has helped and continues to protect hundreds of thousands of my countrymen. However, it makes sense that there are those who believe that the law should benefit individuals who leave Cuba for political reasons and not people who view themselves as economic migrants and continue to regularly visit the Island.

That is, the fundamentals of political protection implicit in this law disappear when the individual is allowed entry and exit to and from a country with a prevailing political system which he allegedly fled. However, this should not mean the repeal of the law but its modification, with the implied compliance on the part of the emigrant with the applicable, fixed parameters of his political refugee status. Failing that, the same standards that apply to groups migrating from any other country should be taken into consideration. 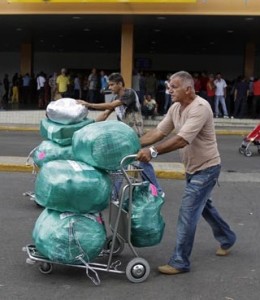 Actually, no Cuban who emigrates does so for purely ‘economic’ issues, since the Cuban regime, dictatorial by its nature, imposes special conditions both at the economic and the socio-political levels, which are essentially the causes of the population’s constant and growing exodus. At the same time that the living conditions in Cuba impose widespread poverty, they impose political incompetence on the population, and this is the point where Cubans differ from other Latin American migrants, so conditions for Cubans and for other Latin Americans are not the same. But protection for political considerations contained in the Adjustment Act must go through the tacit recognition as beneficiary of political émigré conditions.

As for the supposed changes that have taken place with the January 2013 migration reforms and for the current relaxation of travel restrictions between Cuba and the U.S., the Cuban government remains intact in its ability to approve or not the Cuban passport from inside or outside of Cuba, to prevent the Island’s residents from traveling (depending on considerations of “public interest”), and to turn back the relative liberalization of travel, therefore, politics continue marching at the step of Cuban Emigration, and the Adjustment Act remains valid.

What action has most influenced the loss of reputation of the Cuban dictatorship and the gratitude and admiration of the ordinary Cuban towards the U.S.? The economic Embargo or the Cuban Adjustment Act, with all their many demons at both ends of the Florida Straits?

Now that some circumstances that gave rise to them have taken place, and since, in effect, they need to be amended (not canceled), let’s not forget that making comparisons at a political level is not only political ineptness, it is also an inhumane act.

Hundreds of thousands of our countrymen live in the U.S. today as civilized citizens, humble but free, thanks to the Cuban Adjustment Act, whether they belong or not within the group persecuted by the regime, another assessment that seems to greatly matter to politicians, but seems not to have much value when it comes to evaluating the population of a country that, as a whole, is victim and hostage of politics.

Doesn’t stripping that law of its eminently humanitarian character, thus reducing it to a mere political instrument turn it into something as wrong as those who allege that it should not benefit Cubans exclusively, forgetting that in Latin-America, and perhaps even worldwide there isn’t another country with a dictatorship as iron-clad, impoverishing, cruel and long as that of Cuba?

The Cuban Adjustment Act, passed in 1966 to regulate admission to the United States for those fleeing the Castro regime in a sense has been overtaken by the modification of the Cuban emigration laws. Since many Cubans living in the U.S. abuse the law, it would have to be re-evaluated and modified, but not eliminated. 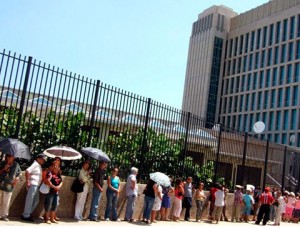 The elimination of the law, which the Castro regime has branded as “murderous” would be to treat the regime to a victory. It would serve as its version of “those who leave Cuba do so for economic, not political reasons, just like emigrants from any other third world country.”

As long as the dictatorship exists, there will be Cubans who will try to flee. The elimination of the Cuban Adjustment Act would leave no hope for those who don’t have the means to leave legally, or to qualify for the program of 20,000 annual visas for Cubans that the US has had in existence since 1994.

We should also review the “wet-foot dry-foot” policy and reformulate the policies of the Refugee Department of SINA [U.S. Interest Section] which is used by many as a springboard to leave the country, contributing to demoralizing and draining the opposition.