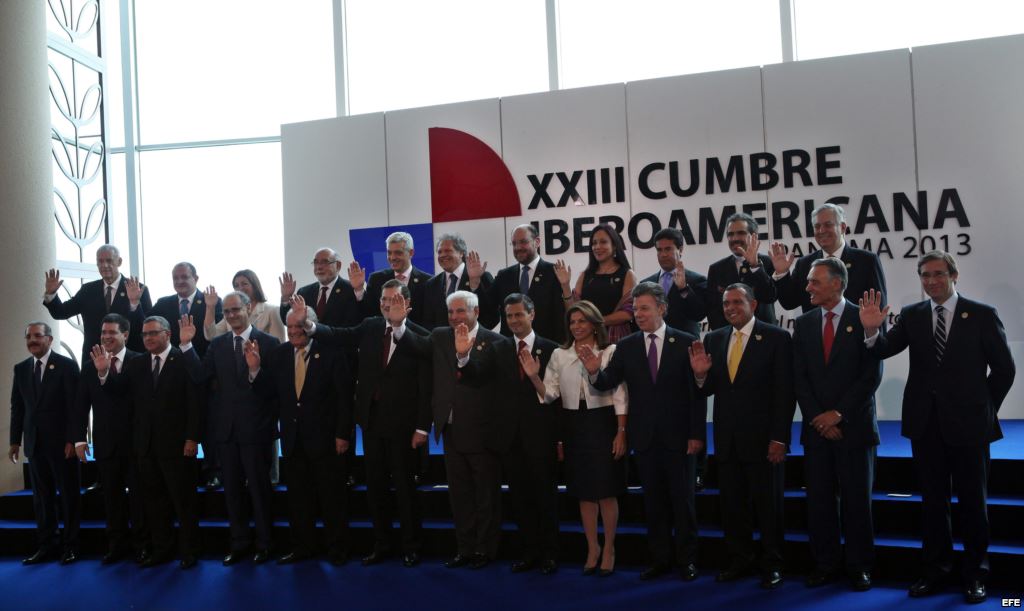 As part of the commemoration of the 500th anniversary of the discovery of the South Sea (Pacific Ocean) by Spanish explorer and conquistador Vasco Núñez de Balboa, the leaders of 22 Latin America countries plus Spain, Portugal and Andorra gathered in Panama October 18-19.

They held, there, the XXIII Iberoamerican Summit, for this occasion, taking as the central theme “The political, economic, social and cultural role of the Iberoamerican Community in a new global context,” with a primary interest in the desire to re-evaluate this inclusive meeting and, as a marvelous irony, a substantial number of absences.

His Majesty King Juan Carlos did not attend, he is recovering from a recent hip operation. However, in the ultimate gesture of respect and elegance, worthy of royal protocol, he addressed the audience by a video message that was viewed in the opening session.

Nor did the President of Argentina, the lady Cristina Fernández de Kirchner come to the great event , she was also recovering from surgery a few days earlier to remove a hematoma from her skull, and now must keep what he doctors call “strict bedrest.”

What is peculiar is that, in a defiant and obviously premeditated act to reduce the  reputation of and tarnish the event, also absent were the illustrious leaders of the Bolivarian axis. A reaction expected and typical from unenlightened people.

It is not a blessed coincidence that in the digital version of the Sunday edition of Gramna they published, and I quote, ” It is symptomatic, for example, that from the South American region only two leaders attended, Colombia’s Juan Manuel Santos and from Paragua, Horacio Cartes , while no one attended from the Bolivarian Alliance for the Peoples of Our America (ALBA).”

It is rational to expect this manner of behavior from the members of ALBA. Boycotting the event is nothing more than a show of force to promote the culture of fragmentation and also to show their disagreement as a bloc with the fact that Costa Rica and Panama are about to enter the newly proposed Latin American alliance in which Peru, Chile, Colombia and Mexico merge their economies and define joint actions to develop Asia-Pacific ties based solely on respect for bilateral trade.

For this, and other reasons, none of the leaders of the Bolivarian gang attended the meeting, rather, offering false internal commitments, they sent their representatives.

But on the case of Cuba, General Raul Castro, knowing ahead of time that the first document to be signed refers to counteracting, jointly, the application of unilateral measures that violate the principles of international rights and that could affect regional peace and international security, decided to send a special emissary in his place (the CEO of “who knows”) who, judging by his aspect, behavior and dress, it’s easy to come to the conclusion that he’s the director of “Whatchamacallit,” a grand prize winner for business excellence, in the vanguard producing breaded croquettes made out of God-knows-what, or the administrator of those FAR (Revolutionary Armed Forces) homemade schemes to exceed their planned sales of crates of festering fruits, rotted roots and wilted vegetables.

Who could expect more, after the resounding success of the Chong Chon Gang  carrier ship, the sweetened armaments and the diabetic crew.